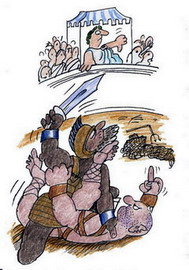 Down but not out!

Science and technology are wreaking ecological havoc, but they are also capable of halting and even reversing the damage we have caused to the planet. All that is required is a radical reformation of the human psyche—what L. L. White optimistically (and chauvinistically) called The Next Development in Man. In Pogo Possum’s immortal words:

We have met the enemy, and they are us!

La Brexit Transhumance: an animal fable From the moment it appeared, the new sheep had been an oddity.

The surrealist film that shocked the bourgeoisie With a Rotten Tomatoes rating of 26%, Barry Levenson's Toys (1992) is one of the most hated big budget films of modern times. The reviews were not only dismissive but even angry, with the sort of anger that dada and surrealist art was intended to arouse in the bourgeoisie.

Under the Sand: The Burial of Europe  How could Britain dissolve a marriage which had brought it so much?

Robert Hughes: The Culture of Complaint   Almost a quarter century after it was written, I’ve gone back to Hughes’ diatribe and feel like David Lambert in Ronald Wright’s “A Scientific Romance”, the narrator who has gone forward in H.G. Welles’ time machine and discovered much more than he wanted to know .

Lolita, or a right Saville row  A local book club in which I’m peripherally involved propelled me back into Vladimir Nabokov’s Lolita, a tortuous journey I hadn’t made in over half a century. The book itself, the two films that had been made from it, and the group’s anguished responses to the highly equivocal relationship between its two principle characters, all came together in an illuminating totality.

Tricky City Song Show - Covent Garden Community Theatre. Way back in 1979 a satirical review that called itself the Covent Garden Community Theatre asked me to produce and record an LP of some of the numbers they’d been performing. I went along to see their show and immediately decided that they were so good and so interactive with their audience that the recording should be done live. In the event, there were only a couple of retakes of individual songs and no intercutting whatsoever—what you hear is exactly what happened!

Listening to the record again after thirty-five years, it is still so up-to-date and so much better than what’s even being attempted now that I thought it should go up here. Listen, gnash your teeth and then go on the attack!

Thoughts on Torture  The winner in a fight among lions will make ferocious noises but will usually stop short of killing the lion he has just knocked down. In contrast, those creatures, like that symbol of peace, the dove, that do not have lethal weapons have not evolved to practice restraint. They did not need to. Lorenz observed a dove actually torturing another to death. Our evolution, students of violence assert, has made us more like doves than lions.

I have seen the future—and it slurps  Kurt Vonnegut chats with Adrian Mitchell in 1972. Much more a meeting of minds than the usual author-journalist confrontation, it top-and-tailed a brilliant BBC Two television program. I didn’t have off-the-air video recording in those days, but I recorded the sound track reel-to-reel.

The Economics of Human Energy in Brooks Adams, Ezra Pound and Robert Theobald This is the M.A. thesis I wrote in 1971. As the fortunes of free enterprise and the banking system rose, it seemed increasingly dated, but suddenly it's even more timely than when I wrote it. Reading it today, I would fault the guarded optimism of its conclusion.

Sample: Ezra Pound quotes a letter from Rothschild Bros., written in 1863: “Very few people will understand this. Those who do will be occupied in making profits. The general public will probably not see it's against their interest.”

The Color Bar In the area of sound recording, for many aficionados, Analog rules! Is not an argument; it is merely an assertion of dogma.

Hoovering up the peaceniks: The FBI sucks! At that moment I lost any residual faith I might have had in their investigative competance.

Art for Art's Sake Environmental and social collapse have led me back to art as unashamed escape. I seek beauty and nobility wherever I can find it.

Both Our Houses: The Demise of Anglo-American Democracy I wrote this in 1995 after five weeks spent touring America. When Obama is voted out of office following the double-dip recession, it will be timely again.

Still whistling in the slaughterhouse “Well,” said Kurt Vonnegut into the mic, “I just want to say that George W. Bush is the syphilis president. The only difference between Bush and Hitler is that Hitler was elected.”

The maestro they loved to hate When Luciano Berio was still alive, nothing would have given me greater pleasure than performing his music in a posthumous memorial.

Music for the Hell of It The arts in Britain today are forced by the very pattern of their support structures to imitate capitalist models whose function is to rob, to reassure, and to accumulate.

A Pain in the Ear  Some reflections on amplified sound.

On smoking a pipe A guest commented, "What a clever idea—painting the ceiling the same color as the walls!" Our living room had started a couple of years before with brown walls and a white ceiling.

Call him Jack... The college buddy who introduced me to Charles Laughton and to life.

A Short History of Progress The upward concentration of wealth ensures that there can never be enough to go around. Ronald Wright traces the history of progress traps.

The Destructuring of Society and the Restructuring of Art Artists face a crisis that threatens not only their livelihood but also their concept of what, how, and with whom they communicate.

WHATEVER HAPPENED TO VIRTUALLY USELESS?
Here is a sad little story. In 1999, after witnessing the rise and fall of several Internet forums, I arrived at what I was convinced would be a sure-fire formula. Offered technical assistance by a virtual friend, I ultimately sent out an invitation.

The Lengthening Shadow Lewis Hill and the Origins of Listener-Sponsored Radio in America  I suffered, I was there...

Pacifica in Vincula  The Life and Death of Great American Radio.

Matthew Lasar: Pacifica Radio: The Rise of an Alternative Network. My review for American Studies in Scandinavia, 1999.