Head for the nearest church!

The 2006 GaultMillau Guide for Austria recommends:

In such a sparsely populated country, these totals suggest either that G-M’s standards have shrunk to vanishing point, or that you can get a decent meal almost anywhere. Providing you don’t demand the very latest in crossover confusion or gastro-scientific pseudo-sophistication, you may safely assume the latter and leave the book at home.

Bear in mind that thi 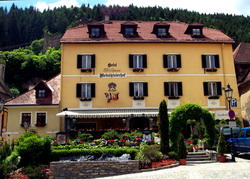 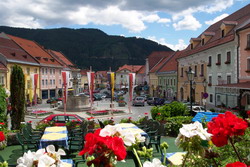 ia, not cosmopolitan Vienna; the most useful restaurants are in Gasthöfe [country inns]. But they can be quite up-market, like Metnitztaler Hof in Friesach, where we couldn’t decide whether to eat on the terrace and enjoy the view... 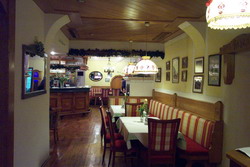 ...or go indoors and sink into countrified comfort. We finally opted for the former.

The food was admirable in execution and attractive in presentation. My starter was a generous portion of sautéed chicken livers surrounding a mound of sharply flavored and well dressed salad leaves. I’ve never tasted better. I would happily have had a double portion as a main course, but then I would have missed the mountain of perfectly roasted duck breast. 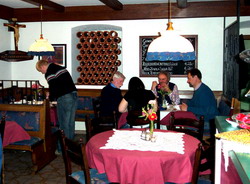 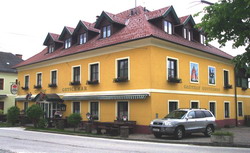 Gasthöfe are usually more modest, like the Gutshof Gotschmar in Diex. My lunch consisted of yet another bowl of potent garlic soup and a plate of asparagus with sauce béarnaise, washed down with Weissbier, which was fast becoming my regular tipple.

This was my introduction to an old Carinthian custom, which was to bring a glass of water on a small tray along with the coffee. I was informed with a wink that since schnapps is the same color, you can finish off your meal with a triple and no one will be the wiser. (The message on the sugar is for English-speaking tourists so they’ll get even fatter, thus making the strapping Austrians in Lederhosen look positively svelte by comparison.)

I could write with equal enthusiasm about every lunch in every Gasthof—nine in all—but you get the picture. Carinthians do not put up with bad cooking. Even in isolated communities where there was no competition, the food was well prepared and generously served. As for its “authenticity” there were dishes that appeared everywhere that could hardly be regarded as local. Knoblauchsuppe [garlic soup], for instance, though not originally a native Austrian dish, was on most menus and was always delicious. The other universal soup was Klare Rindsuppe [beef bouillon], usually with Fritatten [shredded pancakes] or Leberknödl [liver dumplings]. Vorspeisen [starters], though now on all the menus, are not an Austrian tradition.

Nor, of course, is veal or pork Cordon Bleu [a thinly beaten escalope with a cheese slice on top, breaded and fried], which is as omnipresent in Carinthia as it is all over Germany. Wienerschnitzel is everywhere of course, or Schweinsschnitzel [made with pork instead of veal]–in fact, pork in every conceivable form. For starch, you get potatoes, noodles or dumplings, and lots of them. Rindsschnitzel [beefsteak] with fries is of course on every menu. Our salads were not brilliant, but they were healthily ample and usually served as a side dish with the main course. (I soon grew weary of grated carrot.) And in early summer, during the asparagus season, there is Spargel in every conceivable form—cold, hot, puréed, with sauce béarnaise, creamed in soup… I didn’t encounter Spargeleis on any dessert menus, but it wouldn’t have surprised me.

So in conclusion, if you’re travelling around rural Carinthia (which is almost all of it), forget your restaurant guide and seek out the churches—there’ll probably be a fine Gasthof just next door. But a mediaeval ceiling in Gurk Cathedral reminded us of an invaluable lesson: 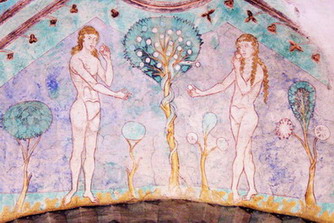 Do not accept fruit from strange women!