What we learned and what we didn’t 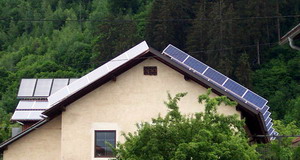 Day-to-day life in Carinthia is neat, efficient, well-organized—in a word, ship-shape. Things and systems work and so, crucially, do people. They know how to manage their environment: outside our hotel there were seven labelled bins and all the rubbish went there, none of it on the ground. Solar panels on private houses were common and in this case [right] there were so many as to suggest that its system was running comfortably on the positive side of the ledger. (Note that they're layered back in such a way as to indicate that there are perhaps half a hundred.)

Our food was good to excellent, though it did not offer the ethnic variety that we've grown accustomed to in London. In the course of ten days we ate a total of 52 prepared meals between us, including breakfasts; most were delicious and only a couple of dishes were slightly less than satisfactory.

Compared to Britain, prices in shops and restaurants were reasonable and the natives seemed to find them affordable. People were well dressed, at least by our standards—even the young did not follow the world fashion of making themselves look as ugly as possible. During our whole stay based in two urban hotels we never saw a beggar, and I doubt if it was because they had been rounded up prior to our arrival.

But it’s always worth examining one's vocabulary. “Ship-shape” has a root meaning that relates to the fact that a traditional wooden ship's hull had no straight lines, and so every plank, every shelf, every cabinet had to be fitted to the precise place where it was to be installed.

In Carinthia, this principle applies to people as well as things. The Austrian man of letters Robert Musil wrote late in life, I was born in an unusual place: Klagenfurt in Kärnten. Relatively few outsiders go there. In a sense this was to determine my future.

What was the result of such preconditioning? A modern biographer describes him thus: Cool, proud, uncommunicative, cold, harsh in his judgment, sharp, a military tone of speaking, vain, elegant, polite, well dressed, distant, official, impeccable, an impressive personality though not a sympathetic or congenial one, proud of his time as officer during the First World War, inaccessible, felt unrecognized, kept people far from him and hence fell into isolation, made slighting rather than positive remarks.

For a man “without qualities” (Der Mensch ohne Eigenschaften was the title of his only famous work), Musil seems nevertheless to have embodied those traits which have so often characterized Austria’s attitude towards the outside world. No longer the hub of an empire, it nevertheless survived the easy capitulation in 1938 to its most notorious native son and is once more a prosperous and independent nation. 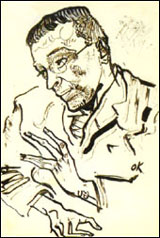 For romantically inclined outsiders, Austria has always danced to the waltz. Its greatest satirist Karl Kraus understood the incongruity between the kindheartedness and nonchalance of its inhabitants, with their love of light music and heavy pastries, and their recurrent worship of the great god Mars. It is a country that tourists love to visit but serious career diplomats often try to avoid. A dozen years ago Britain’s cultural attaché, recently transferred from Stockholm, complained to me in frustration that Viennese art lovers regarded “new” as a swear word. 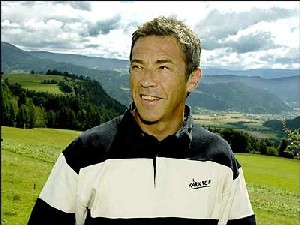 Vienna is now ineluctably a part of the modern world, but Carinthia has largely maintained its isolation. Even by Austrian standards, its political stance is well to the right. Jörg Haider [left], the notorious populist and neo-fascist who made world headlines in the 90s, is no longer a major force in national politics but he is still firmly ensconced as Governor of Carinthia. He speaks their language.

This includes loud objection to immigration, on any scale. Many countries, including Britain and the U.S., bluster periodically about restricting cultural invasion, but their society's indispensable low-paid jobs are mostly filled by aliens who have migrated out of fear and/or deprivation. Often they are deliberately but surruptitiously imported: the natives of a prosperous country are unwilling to work for the poverty-level wages that both government and business can get away with, precisely because of the steady stream of illegal “guests”. In Britain, the world's super-rich who maintain one of many residences there because of its giveaway tax concessions rely on servants whose dodgy status makes them put up with the requisite abuse. And not just the rich—one in three Britons now relies on some form of domestic help, which is rarely provided by their fellow-countrymen. Thus, for a variety of reasons, the increasingly restrictive immigration policies that are adopted in order to pacify the tabloid press and their noisy readers are more honored in the breach than in the observance.

In Carinthia, however, one of the most remarkable things we observed was that the people who waited on us in the hotels, restaurants and shops—and even the people who swept the streets—had Austrian faces and spoke with soft Austrian accents. This echoed our experience of Switzerland, where those who performed the most menial tasks did so without shame—indeed, with dignity, even pride. It was the work ethic manifesting itself in daily life—“It is my profession!”—and it allows Austrians to talk chauvinism out of both corners of their mouths at once. 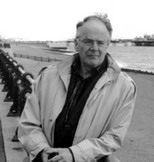 The late Professor Eric Mottram was one of the British avant-garde’s most eloquent spokesmen, but one aspect of his thinking was largely ignored by the intellectuals who were his loyal supporters. He was strongly in favor of restricting UK immigration, and his motives were rooted in human psychology. Social stability, he argued, requires continuity: massive and rapid change coupled with overcrowding breaks down social structures and leads to chaos.

“Massive”, “rapid” and “overcrowding” are the key words. Such politically diverse democracies as Switzerland, Austria and Sweden, with their stable and thinly settled populations, were able within a relatively few years to develop from agrarian into integrated modern societies with a remarkably narrow income spread. As Ronald Wright so convincingly argues, the latter is essential for maintaining social stability. (All three are cold, mountainous, forested countries where it snows in winter and the vegetation is always green. Is this mere coincidence?)

On the other hand, acceleratedly multicultural urban Britain is becoming a loose bundle of closed communities within which the forces binding each of them together also work to exclude the alien and the unfamiliar. In order to accentuate their unity and declare their unique identity to each other (and to outsiders), distinctive hair and clothing are often prescribed. There are also the invisible age-old barriers of caste and class, imported from all over the world.

As a result of this social and economic fragmentation, Thatcher’s infamous observation that there is “no such thing as society” has in Britain become increasingly self-fulfilling. A recent poll verifies that well over half of the adult population believe that “the quality of life in Britain is best improved by... looking after ourselves.” General inhibitions against anti-social behavior at all levels, which can only be enforced by collective public opinion, break down and become inoperative. You can see it all the way up the scale, from the litter on the streets, through aggressively yobbish school children ignored by indifferent or frightened adults, to drunken brawls spilling bloodily out of the pubs, and ultimately to open gang warfare, much of it between ethnic groups whose members are biologically labelled, as if for their mutual convenience. Both innocent bystanders and society as a whole suffer “collateral damage”.

And in Austria? We’re back full circle to where we began our journey, standing on the corner of an empty street with those upright citizens, waiting for the light to change. No litter or profanity here, let alone street violence. If I were one of them, raised to regard prosperity, cleanliness, order and stability as social norms, and I felt threatened with alien anarchy, I'd probably be queuing up to vote for Haider.

What seems like eons ago at the beginning of our Carinthian adventure, we entered Klagenfurt through the usual urban straggle of commerce and industry. It was as dull as most outer cities, but it was clean and orderly. If the bus had broken down we would happily have gone into the nearest Gasthof or Weinstube to refresh ourselves with a Weissbier and a bowl of garlic soup.

Ten days later we took the bus from Stansted Airport back to Golders Green. Entering outer London was like driving onto a film set for Mad Max: miles of graffiti, mountains of rubbish, invincibly ugly architecture, rows of semi-derelict but still occupied houses about to be torn down to make room for yet another sclerotic motorway. We closed our eyes and remembered the forested hills through which we had so recently traveled, occasionally meeting a driver who courteously made way for us. On the ragged fringe of London, if our bus had stalled we would have remained huddled inside, not wanting to risk God knows what in some grimy pub overlooking the bumper-to-bumper traffic.

But would we willingly leave Hampstead Garden Suburb for those verdant Austrian hills? We might be insulated for a while by our imperfect German, but sooner or later we would begin to feel the reactionary social rigidity that keeps those houses so meticulously painted and the crucifix-laden graves so conscientiously tended.

Aha! We may have discovered the magic nourishment of genius: social confidence that gives courage to nonconformity. But no matter whether such a generalization—or indeed, this entire diatribe—be “true”. Let Robert Musil have the last word:

The truth is not a crystal that can be slipped into one's pocket, but an endless current into which one falls headlong.

POST SCRIPT: The Happy Planet Index, jointly compiled by the New Economics Foundation and Friends of the Earth, is “the first ever index to combine environmental impact with well-being to measure the environmental efficiency with which country by country, people live long and happy lives.” The ratings are calculated by multiplying “life satisfaction” by “life expectancy” and dividing by “ecological footprint”. Among the top ten European countries, Austria came first. The UK was number nine.

However, the formula is perhaps just a mite eccentric. Vanuatu, the happiest country in the world, may be paradise for its male inhabitants but, according to an aid worker who lived there for five years, their wives, being mere property, are routinely subject to intimidation and physical violence. Their diet is also suspect: a decade ago cannibalism cases were still being heard in the high court.

The second happiest country, the Index tells us, is murderous, drug-riddled Columbia. My father once saw a double feature listing on a movie marquee that unconsciously embodied a profound truth:

To Each His Own

Haider is increasingly a foreigner in his own country:

But he's back again: