Chewing up the scenery

Murau has an attack of builder’s blight 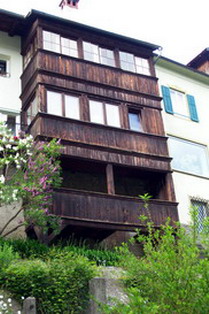 Murau in Upper Styria is a modest town whose attractions ta 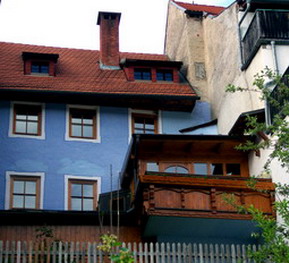 ke a while to discover. After we had used it as a base from which to travel, Mary suggested a walk along the River Mur which flows through it. It was like entering a secret garden: the backs of the houses facing the river were decorated with exuberant wooden porches totally at odds with their sober fronts on Anna Neumann Strasse. It reminded me of strolling through the Berkeley hills past the redwood fantasies of Bernard Maybeck and Julia Morgan, except that here there was the constant diapason of the river rapids and a sudden encounter with an imposing stone bridge. Halfway along we found a plaque indicating that the area had been designated an architectural treasure. 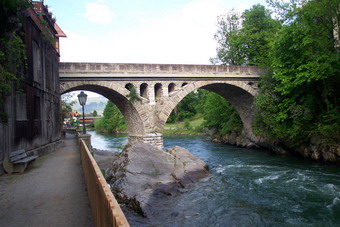 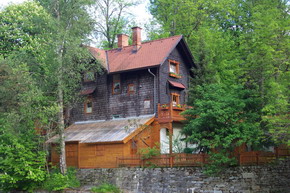 So how have the local authorities chosen to augment the leafy view of the opposite shore? After an international architecture competition they awarded the building of a new footbridge to Swiss architects Meili and Conzett. The theme was “Murau, City of Wood”, which they chose to express with a long straight gash across the river and up the hillside, accentuated with a garish orange stripe. 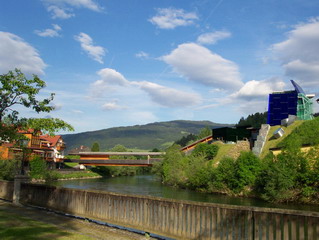 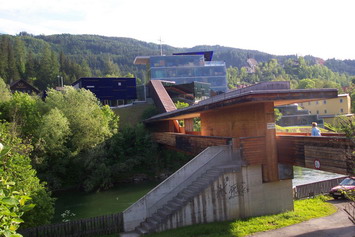 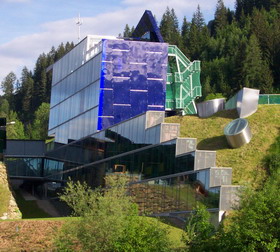 In a second violation of the landscape, the Styrian authorities commissioned an asymmetrical modular box faced with anodized metal panels. The windows are tinted, lest the bureaucrats within be exposed to the resentful gaze of those on the opposite bank whose aspect they have vandalized. Their goal was probably that which motivates governments and businesses all over the world—to commission a dramatic statement that for a brief moment shouts “Look at me!” from the pages of a few newspapers and magazines and then molders away into a permanent and unignorable eyesore.

“It doesn't belong; we are a wood city,” our hotel hostess remarked dismissively. The locals despise it and their disrespect is documented in the hundreds of graffiti that deface every inch of the bridge’s bare inner walls.

It can be argued that the complex provides a dramatic vista for those who come upon it unexpectedly in their river rambles. Thomas Love Peacock skewered this misguided aesthetic in his satirical novel Headlong Hall (1815):

“Allow me,” said Mr. Gall. “I distinguish the picturesque and the beautiful, and I add to them, in the laying out of grounds, a third and distinct character, which I call unexpectedness.” “Pray, sir,” said Mr. Milestone, “by what name do you distinguish this character when a person walks around the grounds for the second time?” “Mr. Gall bit his lips, and inwardly vowed to revenge himself on Milestone, by cutting up his next publication.