It hurts so good!

From crucifix to garden gnome

The crucifix has had a long and bloody history. By the third century the cross was well established as the archetypal Christian symbol, but it remained empty for a further three hundred years until the first datable manuscript image of an occupied cross appeared in a Syrian gospel book of 586. 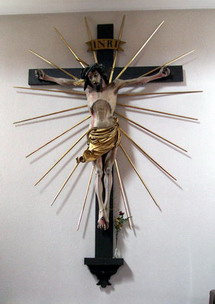 In early depictions Christ was fully clothed, but over the next five hundred years there was a gradual disrobing until the dramatic eleventh century moment when the Byzantines stripped him virtually naked, crowned him with thorns, let the blood pour freely from multiple wounds and gave his face a suitably agonized expression. In the bourgeois nineteenth century the Pope finally decided that enough was enough and issued Canon 1385 which rationed the gore to a few tasteful drops oozing from certified wounds in scalp, hands, feet and side.

The sanguinary thirst may have slackened, but there are still crucifixes in Austria’s churches, graveyards and shrines that date from sado-masochism’s golden age. In some, Christ looks as if he had embraced a porcupine. In the evolving iconography, he sometimes gets down from the cross and stands bound, or in chains, or is cradled lifeless by his equally long-suffering mother. 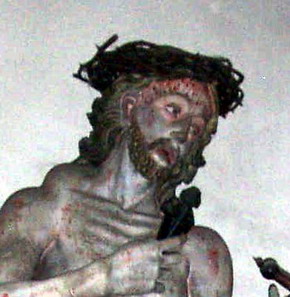 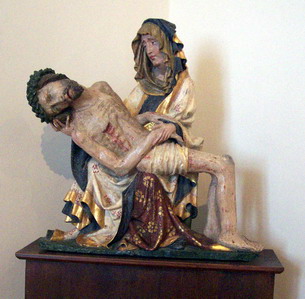 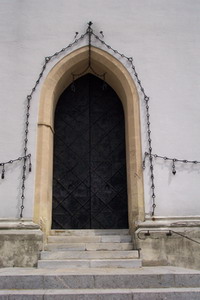 Occasionally even the church itself is shackled. They were really into bondage. 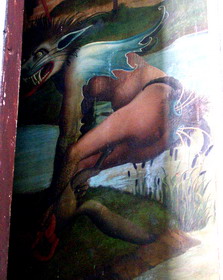 Sick humor as well. The Holy Fathers were equally preoccupied with eschatology and scatology, decorating the fronts of their altar triptyches with uplifting images such as the Ascension, while those with rear access (to coin a phrase) could snicker at the demons defacating fire and brimstone. Mediaeval church art was often just a load of old Bosch.

In mediaeval Austria the line between Christian and pagan sometimes blurred to invisibility. St Nicolas may have been the patron saint of children, but he was traditionally accompanied by the Krampus, a terrifying male incubus who stuffed bad children into sacks. His female counterpart was the ancient goddess Perchten; at the year's turning the two horrendous figures and their followers still hold a torchlit procession through the streets of Klagenfurt—a jolly get-together for which, alas, we arrived much too early.

But all that is now well behind us. Carinthian graveyards are welcoming gardens, as meticulously cared for as their parlors. ( 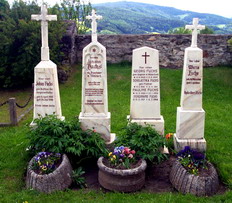 Spooky ruins such as Highgate Cemet 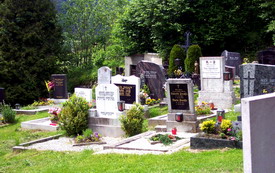 ery are virtually unknown.) It doesn’t matter if there are no family members left to care for a particular grave; there are vast armies of women planting and pruning away in constant attendance. The dear departed whose faces look out from cameo-like photos on the marble slabs may be confident that their last resting place will never be disfigured by an unwelcome dandelion. 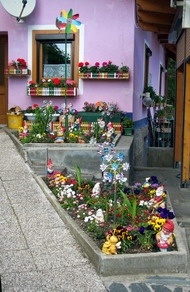 As for the modern pagans, they are jolly little creatures. The first garden gnome was created in 1872 in Graefenroda, Thuringia, and his fecund offspring have found happy homes all over Carinthia. Their kitschy presence may be banned in perpetuity from the Chelsea Flower Show, but here they may freely congregate. Some say that they travel by night from garden to garden, catching up on the neighborhood gossip. In one village we happened on what must have been a family reunion. If we had returned the next day, who knows? Perhaps the tiny plot would have been empty.