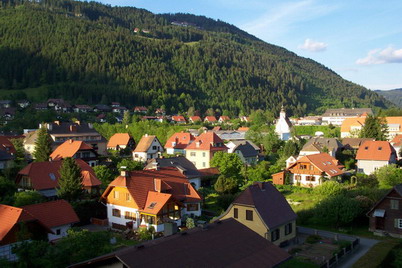 Carinthia in southern Austria is a good place to go when life’s uncertainties become unbearable. It is richly endowed with natural and man-made beauty and both are protected by the constant vigilance of its populace. This [left] was the not unusual view from our hotel balcony, centrally located in the substantial town of Murau. Everything is in Apfelstrudel order, from the managed forests, which succeed in looking virginal while being highly productive, to the tidy towns and villages, where graffiti, compared with most of Europe, are minimal. So are the billboards. Both these omnipresent eyesores, as I realized years ago in Leningrad when they were both totally absent, are opposite sides of the same counterfeit coin. For one you are prosecuted, for the other you are paid vast sums of money.

The social discipline that charactarizes Carinthians is individual as well as collective. If you’re a properly conditioned resident of Klagenfurt standing at a red traffic light, you don’t even think of crossing—even if there’s not a car in sight, you wait until the light has changed. If you were to step off the curb before you were given electronic permission, someone would mutter a rebuke and wave an admonitory finger. Does that not deter you, Ausländer? Then you don’t belong here and sooner or later you will choose to depart for some carefree country where regulations are to be ignored rather than obeyed.

Traffic lights, however, are not a problem usually encountered on Barrie Singleton’s mediaeval tours. This one promised to touch down at twenty-six gothic churches, most of them set in splendid isolation. Not so isolated, however, as to require abstinence as well as penitence: almost all were adjoined by a Gasthof serving good hot meals and cold beer. And so, in the course of a mere ten days, we were to become familiar with a cross-section of Carinthia’s churches, inns and graveyards. 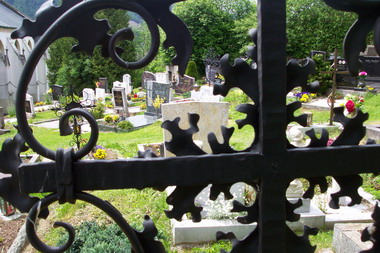 Graveyards? These deserve a page of their own. Here in southern Austria the living and the dead are cared for with equal solicitude. The houses are freshly painted, the graves constantly tended—one of the shortest books in the world would be Derelict Homes and Tombs of Old Carinthia. In fact, derelict anything. Carinthians like their world the way it is and always has been, at least within recent memory. That includes the size and ethnicity of their population. They have elected and reelected as their governor a neo-fascist populist whose ardent nationalism and opposition to further immigration were just what they were looking for. After travelling around the countryside for ten days, I could begin to understand why.