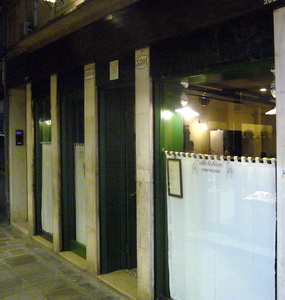 Bruno Gavagnin and Luca di Vita had been friends for years, working in various historic restaurants in the city, and so, when Chef Bruno took over a modest 22-seat osteria in 1993, Sommelier Luca soon joined him. Their success was immediate and long lasting – Flavour of the Month turned into Flavour of the Decade. 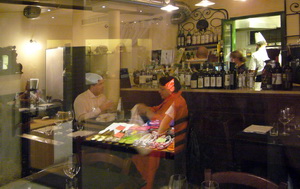 Alle Testiere means “At the Headboards”; these make up part of the bar and there are a couple of iron ones on the wall behind. (You can see them in the photo.) Various other heads gather here as well: this place is not only a celebrity magnet, but also a venue that serious gastronomes have credited with “the best seafood in Venice”, “the best seafood in Italy”, and even put on short lists of "the best seafood anywhere".

Such a simple establishment, no matter how well managed, could never have made such a reputation in, say, a back street in Palermo. Nor could it have charged the prices they do. Venice belongs to the seriously rich, and the accelerating depletion of the Adriatic’s legendary seafood has driven its prices in the Rialto fish market into the stratosphere. (I wrote about this unhappy development in Fine Food Digest five years ago.) Where else could a simple osteria charge 53€  for a modest platter of grilled fish and shrimp and not be stormed by an angry mob? 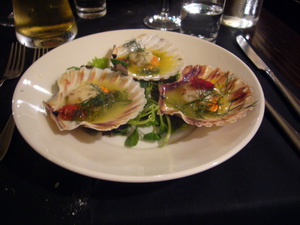 Nevertheless, we came away thinking, not of what had left our wallets, but what had entered our stomachs. Mary’s little starter of three scallops for 18€ (that’s more than five qui 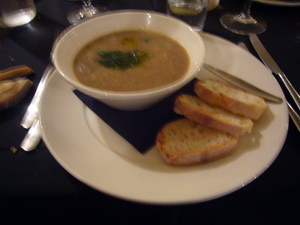 d each!) had an intensity of flavour – complimented rather than masked by the wild fennel sauce – that will linger long in the memory. The tiny portion that she shared with me was an act of supreme generosity. My porcini mushroom and swordfish soup was truly unique – I wonder if its secret is revealed in the house cookbook (which, of course, is in English). 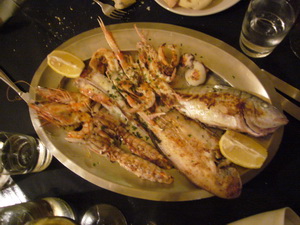 Then on to the eagerly awaited platter of grilled seafood. Our waitress offered to fillet the fish for us as though the usual answer was yes. We declined and, after I’d photographed it, Mary and I took on a fish each. They were so perfectly cooked that it was easy to remove the flesh neatly from the bones. There were several varieties of shrimp and langoustine, including a couple so strangely unfamiliar that they might have come out of a time capsule. We took a long time over this dish and were complemented at the end on how clean we’d left it. 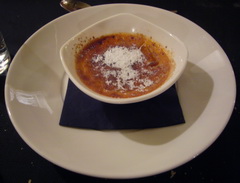 Mary opted to finish with a crème brulée. With a fe

w small pieces of fresh peach, it was one of the best she’d ever tasted – so good that she ordered another. Alas, she had just eaten the last one, and so she contented herself with a panna cotta that proved a worthy successor.

In the face of the ocean’s destruction, Venice has gone a very different way from, say, Palermo. The seafood-loving Sicilians are poor, and so they depend on sardines, which continue to be plentiful, though no one knows for how long. Everywhere in Sicily we were served variations on pasta con sarde, mostly at very modest prices. But in fashionable Venice both natives and discerning tourists are faced with the conundrum which the Slow Food movement must continually do battle with. As traditional ingredients disappear, skills are lost and factory products fill the emptying shelves, the food of peasants can only be afforded by the rich.

NOTE: Very few restaurants serve lemon wedges correctly. The remnant of pith at the edge prevents it from squeezing properly; it should be trimmed away with a sharp knife.

Addresses in Venice are virtually useless. Calle del Mondo Novo goes west from the middle of the S. Maria Formosa piazza, just north of the church. Alle Testiere is on the left, one of the first fronts you come to in a short block of food shops, and so unobtrusive that we missed it our first attempt.