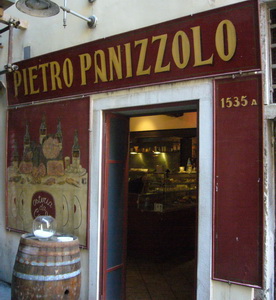 If you want a modest lunch in agreeable surroundings and don’t want a “tourist menu” or a mediocre pizza, Venice can be a tricky place to find it. The city is so oriented towards day trippers that if you choose a place at random, the statistical liability of encountering terrible food is overwhelming. Of course the natives have to eat somewhere – at least the ones that sit down for a midday meal – but it’s not easy to find their little hiding places. Furthermore,  because of the paucity of good reasonably priced restaurants, the best of them are overrun by gourmet tourists who have done their homework. In seven carefully chosen trattoria and hosterie over five days, there wasn’t a single one where, even in the off-season, we didn’t hear at least one table of American accents. 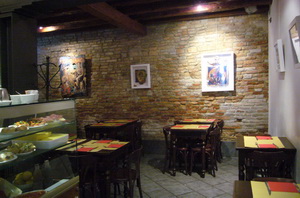 Our choice the first day was a a couple of minutes west of the Piazza San Marco, just beyond the north/south shopping street Frezzeria. As usual the latter was packed curb-to-curb with day trippers trying to corner the market in Venetian glass, but a dozen metres beyond it down a little street with a big name – Ramo Primo Corte Contarina – we were back in proper Venice again.

We were deliberately early – I like to photograph the interiors when there're empty – and made a reservation to come back later. Strolling around the area for an hour we came by chance on the gloriously restored opera house La Fenice (but that’s another story). 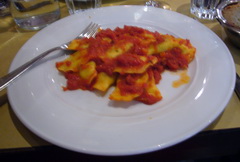 d, the small dining room (20 covers) was already almost full; the conversations were mostly in American English. I later learned that it’s listed in Rick Steve’s Venice guide, so no wonder. 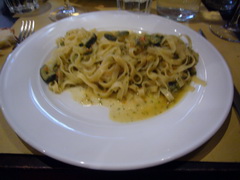 violi [left] were OK but not brilliant, and a rather small portion for 13€. My fish pasta of the day [right] at the same price was a bit more generous and more satisfying. The antipasti on display in the refrigerator case at the front [below left] looked appetizing – if we had elected to have a larger meal, we would probably have been satisfied. It seemed a com 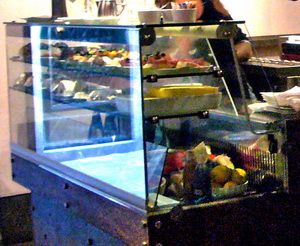 petent no-nonsense place and all my usually reliable sources speak well of it, so don’t be put off by one so-so ravioli—good simple lunch places this close to the Piazza San Marco are not easy to find..

The written menu may be a recent addition; one of m

y sources had said that it was “spoken”. Note that it’s in Italian and English, a pattern that would be repeated all week. In Venice, if you try to avoid restaurants with bilingual menus, you'll probably starve to death.