On Sunday morning, the day of our departure, both the weather and my health improved miraculously. The dull occasional drizzle gave way to warm sunshine and we set out for a visit to the Palazzo Pubblico, the great civic center adjoining the campanile, and a final stroll through the now familiar streets. 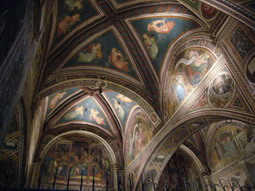 This gothic extravaganza was once the hub of Siena’s government, but the upper floor has become a civic museum whose rooms, commissioned by successive rulers and councils over half a millenium, vie gloriously with each other for attention in a contest where everybody wins. The city’s

preoccupation with the manner in which it was ruled is exemplified in two 14th century murals by Ambrogio Lorenzetti, The Allegory of Good Government [upper right] and The Allegory of Bad Government [lower right]. Both are weighted with symbolism which the viewer could easily spend the better part of a day unpacking.

Lorenzetti faced the same problem as Dante and Milton in their depictions of Heaven and Hell—indeed by narrators of both fact and fiction through the ages. Evil is—well, it’s just more interesting. The most frequently reproduced detail from either of these moralistic frescoes is the fanged countenance of the wicked tyrant (which I stuck at the top of the page to grab your attention). Less than a decade after they were painted, the Black Death made its ironic contribution to the debate and tyranny took over with a vengeance. 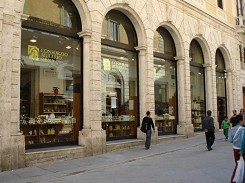 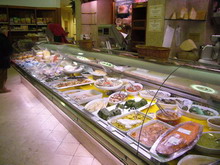 Not wanting another horrible dinner on the journey home this evening, we had gone looking for a food store the day before and discovered, just around the corner from our hotel, the wonderful Consorzio Agrario, a supermarket with much of the gastronomic glory of Harrods but without its prices and pretensions. We came away laden with more than enough good bread, cheese and salami to see us safely home. 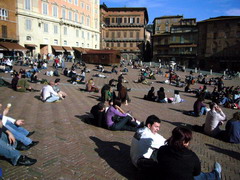 On our final afternoon, the early March weather was so warm that Siena had turned out tutti insieme for what appeared to be its favorite sport—sun bathing. We stretched out for a while and then found a table in front of a casa di caffè on the Campo; soon it was so hot that we moved back under an awning. With great art, fine food and warm sunshine—who needs a beach?