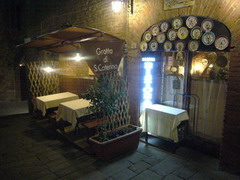 By Saturday la maledizione del treno italiano appeared to have continued in the form of a deep chest cold, possibly acquired from germ-laden air circulating through our sleeping compartment from the rest of the wagon lit. And so, while Mary went off to view the art in the Spedale di Santa Maria della Scala (once the city’s hospital), our hotel room became L'Ospedale Jolly, in which I lay on my back grinding my molars in baffled contemplation of what I was missing. 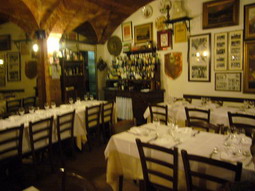 By dinner time I had recovered sufficiently to totter off to what promised to be the best meal of our dismembered holiday. The Grotto di Santa Caterina da Bagoga, the second Siena restaurant recommended in the Slow Food guide, is the pride and joy of Pierino Fagnani, an ex-jockey whose injuries forced him to stop riding in Siena’s semi-annual Palio. (If you read Wikepedia’s description of this horrendous event, you’ll wonder that he survived more than a single attempt.)

Pierino’s other great passion was food. Fortunately for him, the incidence of serious mishap among chefs is lower than among jockeys, and so he has been able to keep his splendid restaurant going for over thirty-five years. Looking around at the other diners, it was evident that this was where Siena’s solid citizens were accustomed to dine on a Saturday night. Our patrono circulated among the tables, conversing with friends who probably appeared as regularly and reliably as the phases of the moon.

The most promising choice was the “Typical Menu” (left) . By the time the courses began to arrive, both my strength and my appetite were flagging, so that I was only able to half-heartedly verify their excellence. The generous portion of stew was the sort of thing I would usually polish off to the last morsel, but I only sampled it. Mary's pasta [bottom left] was, she said, one of the best she had ever tasted. Please accept my assurance that the food was better than my appetite, and these photos as a substitute for verbal evidence. 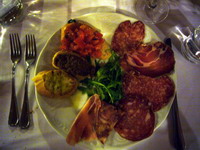 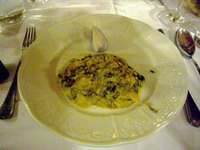 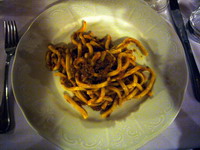 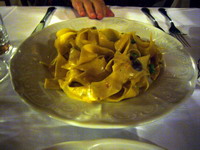 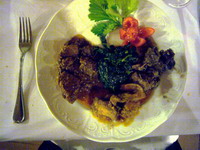 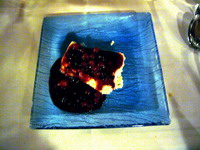