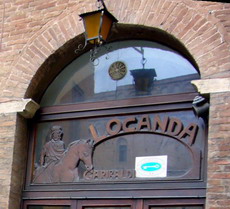 Ristorante Locanda Garibaldi, according to the Rough Guide, is “A cheap and basic trattoria [with] reliable and inexpensive food.” For a holiday lunch, we usually look for promising little bistro-ish places where we can order a single course and maybe a bowl of soup without being shown the door. This one was unassuming and empty of diners, with a varied collection of paintings on the wall. 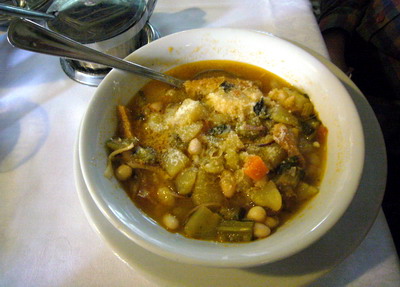 We opted for vegetable soup, followed by ravioli (Mary) and lasagne (me). As soon as the soup arrived we could tell that it would be just right—a rich steamy aroma and thick with a cornucopia of ingredients. Mary wrote them down: white beans, cavallo nero, celery, carrots, red onion, leeks, bread, potatoes, and all in a thick tomato-flavored broth: it was as good as vegetable soup gets!

The ravioli, with cream cheese filling and minced beef served over them, and the lasagna, were both good solid home-made fare. After the meal we fell into conversation with the the patrono, Niccolini Marcello. Not many tourists here today, we observed. “Touristi!” he replied with a dismissive gesture. He didn't seem to know that he was in the Rough Guide, nor to care.

We enquired about the paintings on the wall. “Tutti sono da me.” All of them? The sculptures as well? “Si.” Were they for sale? “No.” He seemed a man proud of his independence, who painted, sculpted and cooked as he pleased. In a world of commercial clones, his trattoria is a place apart, its integrity palpable both to the eye and to the tongue.

Upstairs he runs a hotel which the Rough Guide recommends as a "good no-nonsense two-star", good value for those who don't demand hot and cold running chambermaids.