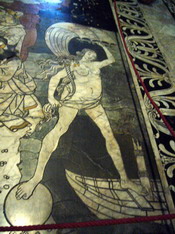 Blown by the winds to Siena

Renaissance Siena: Art for a City had been on our must-see list for almost three months and suddenly its end was arriving mid-January, just before my birthday. Leaving my annual cassoulet to fend for itself, we took ourselves off to the National Gallery.

Sometimes an exhibition of art from a particular time and place reaches out, grabs you by the scruff of the neck and hauls you away to its city of origin. The room full of Beccafumis might have done the trick on its own, but the video showing in the theatre, conjuring up images of the city’s austerely magnificent mediaeval architecture, brought a light to Mary's eyes, and to her lips the happy suggestion that we take ourselves there as soon as possible. A Google search turned up a winter bargain package that included transport by overnight train and three nights in the four-star Siena Jolly Hotel. Green travel plus golden accommodation—what pleasures of anticipation! 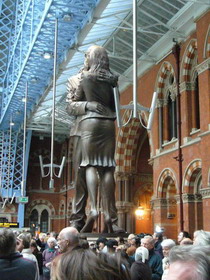 newly rebuilt St. Pancras terminal. It's a thing of wonder when such a high-profile project gets things right, and the restoration of this Victorian monument has been so well carried out that it is not even spoiled by the massive sentimental statue that occupies the place of honor under the huge clock at the far upper end. Off to one side and on a more modest scale, Sir John Betjeman gazes up in wonder at what his lonely campaigning has accomplished.

In Paris we transferred from Eurostar to the Palatino, the overnight train to Rome operated by French and Italian lines under the name Artesia. We should have taken warning from Railbookers’ explanation that the train stopped in Florence at Campo di Marte on the edge of town because it was so unreliable that it had been denied access to the city’s main station, Santa Maria Novella.

Our sleeping compartment was rather on the small side, but it would do. With the beds made up, it was a struggle to maneuver around each other and the ladder, but we could take slender comfort from the fact that we would have been equally crowded on the Orient Express (right). 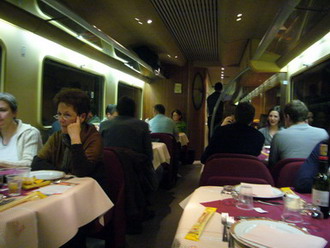 At eight we hurried eagerly to the adjacent dining car. The menu in both Italian and English boasted of its “respect for the rhythms of the seasons”, its “use of fresh and typical products and quality ingredients” and its “contribution to environment protection”. The meal itself w 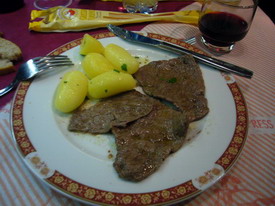 as as close to its promise as the reality of Italian government to the promises of Berlusconi—perhaps the worst institutional food we had ever experienced. Fettine di manzo all’origano were thin slices of shoe leather in an industrial sauce that showed no trace of the promised herb. At 66,70€ for two menus, mineral water and half a bottle of wine, it was the most expensive meal of our holiday.

We were due to arrive in Florence at 7:15 and so we set our alarm for 6:30. An hour passed, with no sign of arrival. Going to the dining car for breakfast, we were told that the train would be late, perhaps by three or four hours. In the event this proved to be “Italian time”—it was well past noon when we finally arrived, and then another four hours to transfer to the main Florence station and get the local train south to Siena. 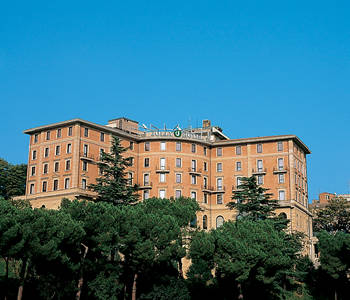 To our relief, the Jolly Hotel was as good as my experience of its London sister had led me to expect. I had made out a short list of restaurants for our three evening meals, together with phone numbers, and the very pleasant woman on the desk promised to make our reservations. We went to our room, unpacked and set out for a couple of hours strolling around the city be 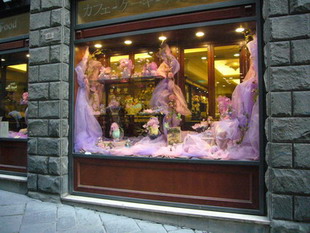 And then, finally, came the magic. Our hotel was near the north end of the Via Dei Montanini, which becomes the Banchi di Sopra and ends at the north edge of the legendary Piazza del Campo. A stately procession of Gothic masterpieces, it is the city’s luxury shopping street and therefore its promenading street as well. The Easter window in a sweet shop looked good enough to eat, glass and all. 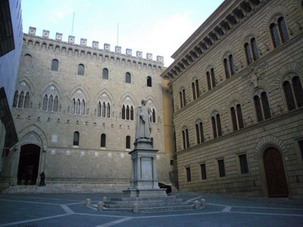 Money has long been the city’s principle source of power. Towering above the shops is the world’s oldest bank still in operation—the Monte dei Paschi di Siena, housed in the austere Gothic Palazzo Salimbeni. It was founded by the city in 1472 to provide cheap loans to sheep farmers. Like all such ancient establishments, it discovered that it was much more profitable to lend to the rich than to the impoverished. 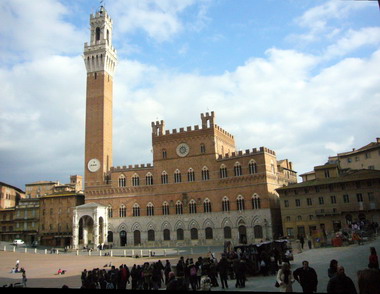 At the bottom of the Banchi di Sopra, a short flight of steps leads down to the Campo and suddenly the narrow streets open out into what Montaigne described four centuries ago as the most beautiful square in the world. There's something to be said for serendipity—the space was not planned but gradually evolved along with the complex underground system of canals that distribute the city's water supply. It was like a magnificent scallop shell, on which a monumental Venus might have been wafted south from her home in the Uffizi Gallery.

We walked a bit further, found the osteria we had selected for our first dinner and verified that our hotel had reserved us a table. Then we strolled back to our hotel, lost in Gothic grandure.

Two months later  In response to a written complaint, Railbookers responded: “Following recent customer and staff feedback reflecting your own comments, we are no longer selling this tour (unless it is specifically requested by a customer).” Accompanying the letter was a generous credit allowance toward our next holiday. We have since booked a Paris trip with them which was quite delightful. If all tour agents were so scrupulous, this would be a happier world.