Remember that a very good sardine is always preferable to a not that good lobster. Ferran Adria

In a poor country, the cheapest and most plentiful ingredients are those eaten most often and with the widest variation in their preparation. In Sicily nothing is cheaper than pasta and sardines, and so pasta con le sarde is a quintessential peasant recipe.

There are a host of legends about its birth. Sicilian writer Alberto Denti di Pitajno gives us his own rhapsodic prescription:

Gather the fennels on the mountains where Pan’s reed pipe and the Oread’s songs still echo. Fish the sardines in the seas where Athens’ triremes were beaten, and prepare them in the muslim fashion, with raisins and fine nuts. The sun will have ripened for you the tomatoes to cover the pasta with a purple-red mantle which will become golden in the oven received from Norse seamen. 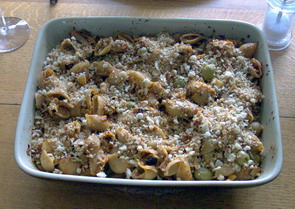 I’ve created my own rhapsody, but the ingredients come from humbler origins. The essence of Sicilian cooking, after all, is economy. With so many ingredients, ordinary tinned sardines in sunflower oil are perfectly acceptable and half the price of those in olive oil (not usually the best anyway). Anchovy fillets packed in oil rather than tinned in salt are preferable, and they're now easy to buy. Capers bottled in vinegar are fine if rinsed; the touch of vinegar does the recipe no harm. And with such a plethora of contradictory “authentic” recipes, I make no apology for the capers and the olives, which figure prominently in Sicilian cuisine.

The ingredients are based roughly on Clifford A. Wright’s Cucina Paradiso, the method on my penny-pinching Sicilian imagination.

½ cup tomato paste and a glug of ketsup

A handful of pitted green olives

Open the tins and drain the oil into a very large hot frying pan. (Best to cover 'til it stops spattering.) Start with the fennel and onion, frying until they are well softened but not browned. Add the other ingredients except the pasta and bread crumbs. Simmer slowly until thoroughly cooked down and integrated, adding water as necessary. The mixture should be a bit sloppy.

When the sauce is almost done, cook the pasta separately, 'til al dente. Drain and stir into the cooked sauce in the pan, over heat. Tip out into an ample gratin dish.

Up to this point, the recipe may be done in advance. When ready to serve, put the gratin dish in a cold oven and bring it to gas 6, 200ºC, 425ºF. After a few minutes, check whether the mixture is too dry; add water if necessary. Bake until bubbling. Sprinkle with the crisp toasted breadcrumbs.