In Search of Sicily 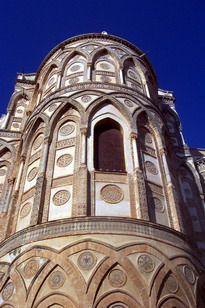 Starting with the Phoenicians, Sicily has been trampled over by a succession of invaders and occupiers who have left their cultural footprints on everything from architraves to anchovies. Churches glow with the shimmering complexity of Greek mosaics; traditional foods recall their Arabic origins in the sumptuous marriage of fish, fruit and spice.

But these opulent echoes can be drowned in the cacophony of poverty and corruption, and urban Sicily is not a place in which to wander about unguided or unescorted. Mary and I had intended to travel there, but we did not want to strike out on our own and we had not found a package tour that attracted us. There was the possibility of cooking and eating for a week under expert instruction in some idyllic fattoria, but such pig-outs are expensive, caloriforous and swarming with rich American matrons. Furthermore, they are usually short on general history and culture—if it’s only the recipes and cooking skills you’re after, then join a class or even get an expert to teach you privately at home, for a fraction of the cost.

The option that looked most appealing was a Palermo-based ten-day tour organized by Barrie Singleton, Head of Art History at Morley College. Its stated objective was to make the rounds of museums and Norman churches, particularly those with Byzantine and Saracen features—fertile conjunctions of East and West. Over several years his tours had accumulated a loyal following of enthusiastic mediaevalists, which virtually guaranteed that there would be no chavs, rappers, or stockbrokers. And however long we were to spend improving our minds, even scholars must be given ample time to nourish their bodies as well.

Our first night in Palermo, we arrived too late to eat at the hotel. The first trattoria we found still open was down an uninviting flight of stairs, with anonymous international pop music clearly audible. Below was a big nondescript room with an active television set high in one corner. There were few diners except for a long table at which a family party was in progress—with babies and granddames, it would have been four generations. At another table a loving couple were affectionately oblivious.

It must have been near closing time, but the waiter greeted us cordially. At this late hour we only wanted one course each. Mary ordered penne in a ragu with mushrooms which proved to be rich, brown and thick, with little clams and mussels. My choice, a mixed fish plate, consisted of several small fillets and a few cuttlefish rings, all lightly battered and gently fried to perfection. We shared a simple salad, with oil and vinegar brought separately. The bread was substantial and tasty. With a small pitcher of wine, the bill came to just over 15€. As we left, the family were singing “Happy Birthday”—the first time I'd heard it in Italian. It was a promising start.

These pages are not a recap of the splendid art and architecture we saw—I leave that to the experts—but a mouthwitness report on the food we found, suggesting a few typical eating places in Palermo and vicinity and warning against others. We did not look for superchef showcases (which are becoming much the same the world over) but searched out what would in Paris be called bistros. We weren’t sorry.