After pursuing culinary authenticity assiduously for years with a religious zeal, I’ve come to take a fairly relaxed view of it. This is partly the result of a paper I wrote for the Oxford Food Symposium this year; after I’d finished it, I changed the title to Authentic? or just expensive?

Where cassoulet is concerned, I’ve had some differences with Charles Shere of Chez Panisse—not arguments, really, for our friendship goes back forty years to when we were both working at KPFA in Berkeley—but rather an agreement to disagree. As a council of perfection, Charles’ and Lindsey’s recipe is the pinnacle. It takes up four pages in The Open Hand Celebration Cookbook and consumes generous hunks of the better part of a week to bring it to fruition. It starts with making the confit and sausages, then the stock, then a pork ragoût, then soaking and cooking the beans, and finally the assembly and baking of the cassoulet the day before it is to be served. (Like so many of the finer things in life, it is better warmed over.)

It’s a wonderful recipe with a wonderful end product, but I’ve simplified and deconstructed it in certain respects and added another element from the recipe I used to follow, that in Richard Olney's French Menu Cookbook. The lamb stew which he incorporates is exquisite in itself, and when it’s made with mutton, slow-simmered for several hours, it takes on heavenly dimensions. Details later.

First, the confit. Its origins lie in two historical factors: (1) the raw material from which it was made and (2) the method of its preservation. First, the meat of the geese or ducks that are force-fed to produce foie gras has a coarseness that does not take kindly to roasting or braising; it requires a rather more assertive treatment to tame it. Second, the production of foie gras at the height of the season produced such a massive by-product of left-over flesh that in pre-freezer days it had to be salted down or thrown away.

I love confit, but I also want to keep my salt intake within reason. These days, confit is not made so much for purposes of preservation as to meet a traditional demand. Ironically, many of the birds that are so preserved were not raised for foie gras, and so have a delicacy of flavor that fades under the violence of salting and preserving.

My own solution, for economy as well as aesthetics, is to collect and freeze duck legs that have reached their sell-by date at our local Waitrose and have been reduced. Then, at the beginning of cassoulet count-down, I thaw them and roast them slowly, covered, in the oven. I separate the fat and juices, remove the meat from the bones and cut it into bite-sized chunks. The bones then go towards making the large quantities of necessary stock. Containers start to accumulate in the freezer that will come out on Friday for the Saturday assembly.

Does the slow-roasted duck meat taste as good as confit? Is there a noticeable difference in the final cassoulet? A few years ago I asked Paula Wolfert what she thought and her off-the-cuff opinion at that moment was that the confit would need around six months maturation before it made much difference.

Please note that I’m not attempting to tie Paula to something she once said in idle conversation, or to establish a right and a wrong method of making a cassoulet, but am simply exploring alternatives that work to my own satisfaction. The same with the sausages. Some perfectly respectable recipes state that they should be parboiled; I prefer the taste of roasted sausage, so I cook them on a rack in a covered pan with a bit of water, in a medium oven for about an hour, taking them out when an insertion thermometer tells me they’re safely done—over 70ºC. They won’t be very brown, but they’ll be firm enough to cut into 1” lengths and store ‘til the fateful day. 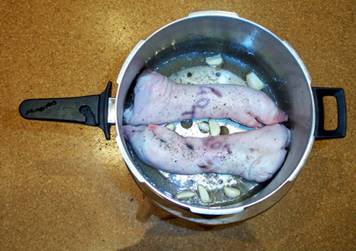 The juices from the sausages then go into our big pressure cooker to steam-braise the pig’s feet. (This is one of the most essential pieces of equipment in our kitchen.)

Some recipes instruct that the feet should be split and cooked with the beans, but I have two objections. First, splitting produces bone splinters that take forever to remove; if they are cooked whole, any tiny bones you miss will be little round pellets, not life-threatening fragments. Second, I like the cartilage cooked well down so that it serves to thicken the cassoulet to an oleaginous unctuousness. (Say that slowly three times and your mouth will begin to feel as if you’ve already taken the first bite.) That takes up to two hours in the pressure cooker; by that time the beans would be reduced to a puree.

You can see already that I like to follow a cassoulet recipe that gives me maximum control over each ingredient and maximum flexibility as to timing—they ultimately cook so long together that there's no problem integrating the flavors. I make a ratatouille the same way, partially cooking each vegetable to its own schedule and then combining them for the final stage. It’s obvious that I’m not a chef with a restaurant’s demands for efficiency and last-minute completion, and that I have all the time in the world. For all I care, the Chopin minute waltz could last an hour.