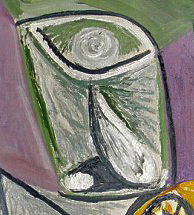 Where verity is volatile 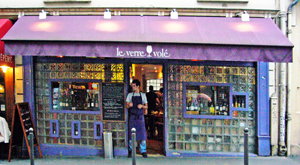 La Verre Volé is one of those new bistros that Alexander Lubrano describes collectively as the “cosmopolitan market-driven contemporary bistro cooking that is the best eating in Paris right now”. The previous night we were at L’Office, and the two were so similar in ambience and cuisine that they could have come from the same stable. 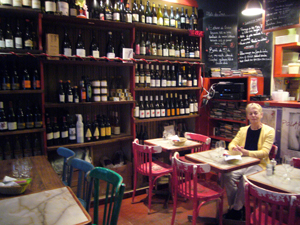 Like L’Office, you could call it a wine cavern with food on the side. The wines range from around 4 to over 200 euros. Says owner Cyril Bordarier,  “I’ve always loved wine, but I can’t stand the snobbery that goes with it. I got tired of selling wine I didn’t like to people I didn’t like. I wanted somewhere I could feel at home.” (Thanks to Frank Wynne for the quote.)

Did that include the music? It was as hip as the ambiance but not loud enough to demand attention until I gradually realized that I was listeningto something familiar that I hadn’t heard in years. It was Cheap Thrills, the big 60s hit by Janis Joplin with Big Brother and the Holding Company. Wow! I’ve still got the LP with the legendary R. Crumb cover. 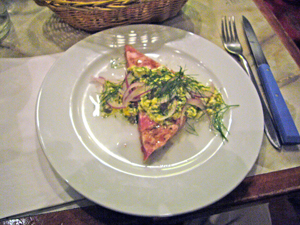 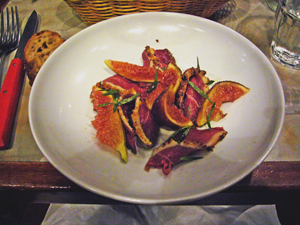 But on to the food. Mary started with their house-made smoked duck breast and Vaucluse figs [left]. My starter was paté made from the heads of prize-winning pigs from Giles Vérot [right]. Rich intense flavour—they didn’t die in vain! 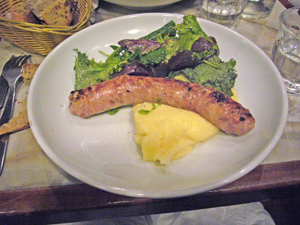 was a big pork sausage [left] with mashed potatoes of a deep enough yellow to show how much butter had been beaten into them. My choice was roast loin of pork with grilled beetroot, beans and 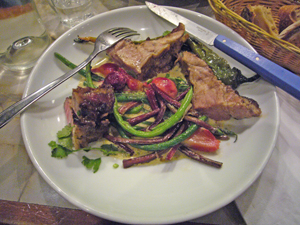 sweet chili [right]. It came in a generous mountain that I pulled apart before photographing to show in detail how appetizing it all was. The meat was fatty, but what delicious fat—thank heaven the dietary authorities are now telling us it isn’t bad for you! And once again, it’s good to see  really healthy and equally delicious fresh vegetables so generously featured in new bistro cooking. 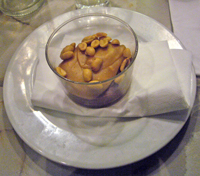 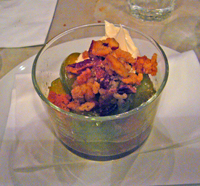 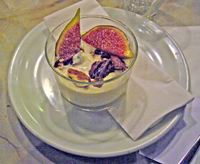 Desserts? They weren’t listed on the menu and we ate so greedily that I didn’t note what they were but they prompted us to order a third to split between us. It’s a good thing we don’t live just around the corner.

But there was one dishonest touch that should be mentioned. As is well known—well, certainly by us cognoscenti—there is a 15 per cent service charge included in French restaurant bills. This is required by law as tips are assessed for taxation purposes. But the printed English menu we were given ended with the words “service not included”. Is this legal? I would have commented if I had noticed it before we left.

During the meal we got into a conversation with a young American law professor (easy to do with the tables so close together). When we got home I checked him out on the web and found a very interesting and progressive paper on broadband localism in the US. I wish we’d had more time to talk.

Perhaps if we’d stuck around we’d have been in for even greater treats. Meg Zimbeck  writes:

There are two kinds of evenings at Le Verre Volé. The first is composed of dinner, wine and intimate conversation.…The second kind of evening chez Stolen Glass ends with chairs on pushed-back tables and some manner of debauchery.

The late night punters at La Verre Volé seem to have got their priorities right. As Mark Haddon wrote in the Guardian,

[H]uman beings have been drinking [alcohol] for 7,000 years to get drunk…. [R]ationality, perception, propriety, insight, libido, our whole relationship with reality is hostage to a simple chemical produced when fruit rots. The Greeks knew better. Dionysos was the god of ecstasy, not the god of fine dining.

NOTE: The painting is another verre volé, part of Picasso’s Glass and Pitcher from 1944, which was stolen from an exhibition in the small Swiss town of Pfaeffikon, near Zurich, in February 2008