John Talbott: Le Gaigne in the 8th: Not like the old place in many ways.

“- prices many times that at the old haunt .”

So read this as ancient history:

Made it, Ma! Top of the World!

It says a great deal about the state of the economy that Le Gaigne’s opening last year generated something like the excitement of L’Astrance eight years before. There was a big difference between the two in the level of architectur 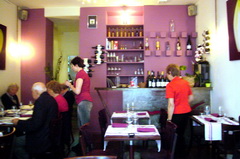 al sophistication – if a few decorative features were stripped out of this new little 20-seater, it could pass for a neighbourhood café. And unlike L'Astrance, it’s a totally informal mom-and-pop operation, the chef’s young wife cordially and efficiently serving front-of-house in faded jeans. Only the elegant wood-bound carte and, subsequently, the even more elegantly plated dishes, give the game away.

Due perhaps to Mark Bitman’s enthusiasm in the New York Times, the predominant voices in the room were upper-class American. In one corner was a table of six Golden Oldies, archetypal representatives of the Ivy League/St. Grottlesex brigade. At the end of the evening they left in a stretch taxi.

Like the other rising young stars in the Paris bistro scene, Mickael Gaignon served his apprenticeship in some very up-market establishments (Le Pre Catelan, Pierre Gaignaire and, most recently, Gaya). Following the critical consensus, we decided to sample his versatility with the menu degustation. Mary is a light drinker, so I opted for a single serving of the wine flight. (She got most of the Muscat, which she's rather fond of.) 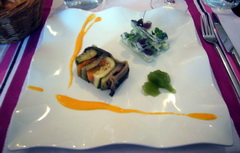 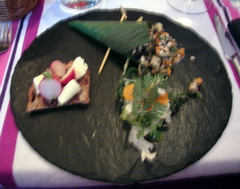 Whelks in aioli, served in a cornucopia [inedible];
toast with radishes; shavings of crunchy vegetables 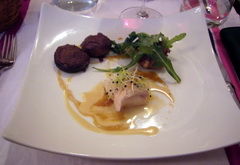 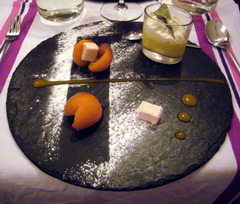 It was all quite stunning and kept bringing to mind our introduction to L'Astrance years before. If I lived in Paris, I'd be back often — by no means an extravagance at lunch time, when the Formule déjeuner is only 16€ or 22€.

Back in 2001, Bénédict Beaugé began a column, "The most important gastronomic event of the last few months in Paris has been, to my mind, the opening of L'Astrance. . . . I hope that L'Astrance will be a model for a new type of gastronomique establishment - both less expensive and much less formal than we've had in France before at this level." Since then, while L’Astrance has ascended into the stratosphere, the economic goal posts for its successors have been lowered practically to ground level. During this evening’s tour de force, we were continually impressed both with the level of expertise and the economy of ingredients. Indeed, the only animal protein was a small quantity of whelk (the cheapest of shellfish – at La Ferrandaise, we’d been given a whole bowl as an amuse bouche) and a few ounces of monkfish, pork belly and chicken. 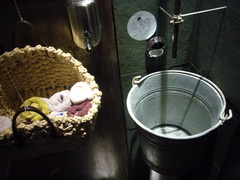 In the loo after dinner I found the perfect metaphor of Pere et Mere Gaignon’s brilliant little operation. The washbasin had been wittily improvised from a galvanized bucket, but there was a basket of soft hand towels. All rather rococo, like the classy nymphs and shepherds in a Watteau landscape. How long will it be before Le Gaigne moves up market? That may well depend on the market itself.