Alas, this bistro has disappeared from the guidebooks and even from the Paris Yellow Pages. I leave the review here as a memorial. 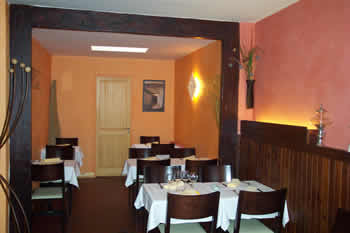 Now, this is my idea of a modern bistro, and my enthusiasm is shared by authorities more eminent than I. Generously spaced tables are enclosed by pale walls and ceiling, with slender beams of dark wood arranged in simple perpendicular patterns which are reminiscent of Japanese architecture without actually imitating it. The only spectacular element of décor is the food itself, which is served on a variety of round, square and triangular dishes - some pottery, some glass - which would not be out of place in a museum. For such a modest establishment with such a reasonably priced menu, the proprietor must have spent a fortune on them. I hope that the dishwasher is as meticulous as the chef. 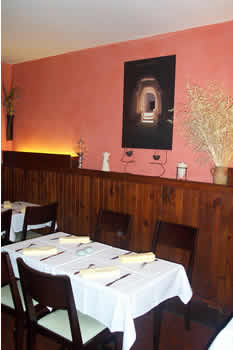 What goes on these beautiful plates is visually worthy of them - no vulgar towers, no busy dribbles, but pleasing arrangements of shapes and colors which are functionally determined by the texture and consistency of the food itself. My starter, for instance - petit paté de moussons - was a low molded cylinder of chopped mushrooms, served hot and topped with two short crisp strips of chunky bacon, bedded on a few lightly dressed salad leaves, and all displayed on a spectacular triangle of pale roughly surfaced glass. Edible art! It was vandalism to eat it.

Our companion for the evening was the long-suffering Frank, the other half of the Laurel-and-Hardy duo who bickered their way through Darkest Gaul. Fortunately, Frank, a retired lit prof, has granted me poetic license. That he will still enter a restaurant with me is ample proof of his forgiving nature.

On this occasion we were also accompanied by his wife Barbara, whose passion for fine food equals our own. They have taken long-term rental of a Paris pied-à-terre from a French friend, and she has been remaking the bachelor pad into a smart little apartment.

On our way to the bistro we experienced yet another sample of the Parisian attitude towards foreigners. To avoid carrying a guide book, I had copied the address into my small diary. The street number, when we arrived at it, proved to be an apartment block. At this crucial moment a gentilhomme approached. Barbara, the most fluent French-speaker among us, pointed at the name in my diary and asked if he knew the restaurant. He hadn't heard of it but saw that I had also written down the phone number and offered to call them on his mobile. A short conversation revealed, as I suspected, that I'd left off a digit of the street number. It was worth the brief anxiety just to experience a soupçon of French civility.

Back to the food. My main course was a hearty plateful of fricasie de rognon de veau, a generous circle of little kidneys surrounding a small mound of couscous. On the brown pottery plate they looked like sculptural protrusions from the glaze. The juices were ample and intense.

I'm awfully fond of offal. One of my happiest memories is of a financiera made for us by a friend in Turin, a grand lady who for years had presided over the Casa Della Trippa, which she had inherited from her father. In her version of this concentrated classic, sweetbreads, brains, cocks' combs and chicken livers were slowly cooked down along with artichokes, mushrooms and cucumber in cognac, marsala and white wine, until the mere exhalation would have sustained an arena-full of gladiators. . . . My palate's in the pot with Ariana and I must pause till it come back to me.

Meanwhile, Barbara and Frank were both tucking into breast of young chicken, fried in a thin batter and wittily sandwiched between two shallow domes of roasted aubergine. The Big Squawk?!

Finally, the dessert. We had been asked to choose in advance because one of the options would require early preparation. We all opted for it. This marvel proved to be a miraculously suspended rectangle of mille-fuille pastry within a complex structure of wild strawberries and whipped cream- an engineering feat worthy of el Bulli, that gastronomic Mecca that serves up edible Dali-esque structures high in the Catalonian hills. For once, I was happy to be served a clichéd edible tower, taken almost to self-parody but still attractive to the eye.


Behind this modestly unique establishment there seems to be, not just a fine chef, but an active intelligence. Frédéric Breton does his own shopping in the Rungis market - did he do his own interior decorating as well? He certainly must design what he serves up on the plate, which exhibits inventiveness and wit.

In the world of food, such attributes often degenerate into Kalifornia Krazy - good for a yuk, but who'd want to live with it? As the name indicates, La Folletterie is indeed playful, but with such restraint that I would happily dine there day after day. The humor is of the sort that makes for a good life - the ability, when appropriate, to take everything seriously except one's self.