Surrealism envelopes every aspect of Paris life. Who would have thought that a futuristic hi-tech toilet, a drunken derelict and an elegant bit of graffiti . . . but Im getting ahead of myself. It was the first of this unlikely trio that led me to Baracane, the bistro which is an offshoot of the excellent if over decorated modern restaurant, lOulette. The bistro is less pretentiously and therefore more comfortably outfitted with bentwood chairs, framed pictures scattered about the beige grasscloth-covered walls, bright yellow tablecloths and a red carpet which has seen better days.

Unlike the menu. The hure de cochon [pigs head cheese] was robust without being overly 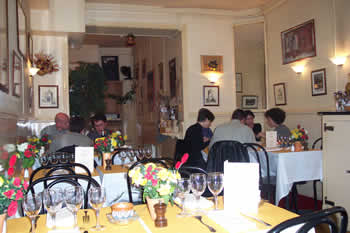 aggressive and was served with pain levain of a standard equal to Kaysers. The magret de canard roti which followed was absolutely exemplary. The waitress informed me pleasantly but unequivocally that it could be served either rare or medium  there was no other alternative. Shades of Nico Ladenis! Mine was in fact very rare, but with a tenderness one associates with long slow cooking. It was finely complemented by the potatoes, which had been thinly sliced and then well roasted with lots of duck fat and garlic  sublime!

The 230ff menu included any half bottle one wanted from the extensive wine list. I chose a 1997 Madiran from Chateau de Diusse and was not disappointed  the southwest origins of the chef show up in his cellar as well as his kitchen. The tourtière aux pommes was a delicious textural contrast of soft baked apple with a crisp topping of crumpled filo pastry which shattered under the spoon

In cabinets around the cash register near the door was a large assortment of preserves, confits, wines, spirits other proprietary comestibles which could be purchased at the end of the meal. It was such a homely little establishment that this didnt feel at all out of place. In fact, I had been eyeing an old armagnac all evening and treated myself to a snifter of it with my coffee. 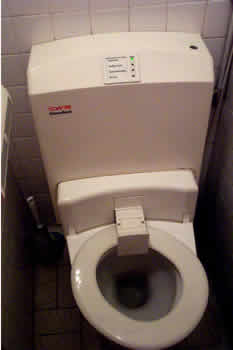 All that liquid had to go somewhere, so I retired to the single-sex toilet in the courtyard. I had forgotten that it was anything out of the ordinary and so I was amazed to be greeted by a gleaming monolithic structure as commanding as the black plinth to which the cavemen make obeisance in the opening of Kubricks 2001. Fortunately I didnt need to sit down. I did the necessaries and then reached my hand out towards what appeared to be the operating switch. The whole structure immediately sprang into life with an ominous hum, a section of the rear coming out over the seat, grabbing it and proceeding to rotate it under a sterilizing ultraviolet glow. The seat, constructed of flexible hollow plastic, appeared to be writhing in agony. After a long minute it was released and the clamp receded back into the structure of the upright tank. Had I been a primitive tribesman I would have fallen to my knees in an act of worship. And if I had inadvertently begun the ritual while occupying the seat . . .

The journey back to my apartment was partly by way of the Metros Route 1, whose new trains are constructed as a long continuous passage from car to car. Just inside the door through which I was about to enter an old drunk in filthy rags was sprawled on the floor. I moved along the platform to the next door and found a seat. After a few minutes two attractive, elegantly-dressed girls came along the aisle, stopped just in front of me and took out portfolios in which they had been sketching the miserable wretch in graphic detail. They compared their drawings, commenting on each others technique. When they saw me looking at them they smiled conspiratorially.

At the next station I got out and walked to the platform where I would catch my next train. 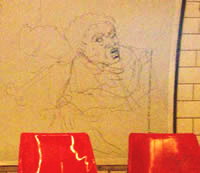 Thinking about how deeply art was imbedded in the structure of everyday Paris life, I glanced across the tracks at the far wall. A large expanse of white in an advertising poster had presented an open invitation to graffiti, but not in this instance the sort of crude scrawl or bold colorful lettering one usually sees in an urban setting. Rather, it was a delicate line drawing of a tortured face, a Rimbaud or Baudelaire of the imagination, his mouth open in a scream of rage or pain. Ah, Paris! No wonder that between the World Wars we Americans came streaming to you from home towns where beauty was for sissies and culture an obscenity. For so many of us who were born later, it was a generation of European refugees who opened our eyes, our ears and our palates.