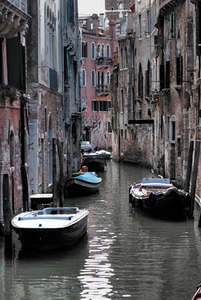 For much of its history, Venice has exuded something of the exquisitely moribund. When Lord Byron discovered it in 1816, the Napoleonic wars had reduced it to abject poverty. During the months that he spent journeying from boudoir to boudoir, it had sunk so low that it served him as a metaphor of the passing of empires. (Both he and John Ruskin preferred the mediaeval relics to the Palladian neoclassical monuments, preferably those that were falling apart.)

Just over half a century later, Henry James wrote down his own Early Impression, gained from peregrination rather than fornication. The city would later serve as the setting of two of his greatest works, The Wings of the Dove and The Aspern Papers. The latter’s elderly protagonist is virtually a personification of the city itself: she is the possessor of a dead poet’s love letters, ardently pursued by a “publishing scoundrel” who wants to get his hands on them. (There’s a very useful guide to James’ Venice, pictured right; it’s available in local bookstores.) The story would be lived out in modern Venice in a schemer’s serpentine manipulations to get her hands on a treasure-trove of Ezra Pound’s documents that he had left in the care of his long time mistress Olga Rudge.

In later years, Venice has served as the setting of increasingly decadent and ominous fiction. The most frightening is Daphne du Maurier’s short story, Don’t Look Now, made into a truly terrifying film. And there’s Thomas Mann’s Death in Venice, the basis for a powerful opera by Benjamin Britten and a Visconti film starring Dirk Bogard. In 1911, when the story takes place, the city was even then totally reliant on tourism for its economic survival. 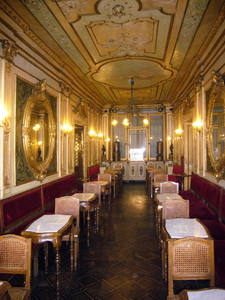 e in front of the Piazza San Marco’s aristocratic Florian Café [right]. In a soul-baring confession, an unhappy gentleman reveals the folly of having read too much and lived too little. Four decades ago it was adapted for radio by Eric Bauersfeld who, together with Bernard Mayes, gave it a memorable reading. When we put it together, Eric and I were then so ignorant of Venetian ambience as to dub in an occasional passing carriage or motor car; today, verisimilitude would require a chattering multilingual crowd. You can listen to it here – it’s cheaper than a Venetian holiday, and the sad gentleman’s ennui might make y

ou decide that it just isn’t worth the effort. (There's a stinger in the tail that's not part of the original production.)

But of course it is. It only requires some careful research so as to avoid the commercial expense and vulgarity that pervades so many of its public places (and on which, alas, it still relies for its survival). The Slow Food Osterie & Locande d’Italia (in English) is indispensable; it lists B&Bs in good locations at not much more than half a hundred euros a night and a few good reasonable eating places, most of them well away from the center.

The museums aren’t overly crowded—there are no Mona Lisas or Venus di Milos to attract hundreds of jostling box-tickers. And best of all, Venice is an ideal place to walk. Its concentration, its history and its geography mean that there are no monstrosities going up, either high-rise or low-rise. The narrower the canal and the smaller the street, the fewer people you’ll encounter. But even though the population is drasti 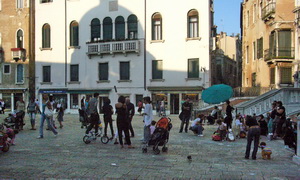 cally diminishing, there are still those who live here, and they’re not all wealthy fashion designers and impoverished nobility. Just around the corner from our hotel was the Campo Santa Maria Formo 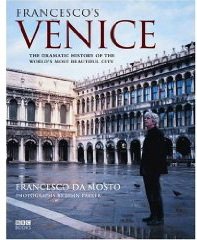 sa, one side of which was a play area with lots of small children. Someone has to take care of all those tourists, and they can’t all commute every day from Mestre!

Knowing what we know now, Mary and I could return for a holiday as cheap as this one had been expensive. Either first or second hand, Venice is not to be missed. If you can’t (or won’t) experience the real thing, then buy the DVD of Francesco’s Venice and its accompanying book. Even Thomas Mann’s disillusioned voyeur would be moved to gasps of vicarious wonder and delight!

November 14, 2009, BBC Radio 4: Five hundred years ago Venice was one of the most highly populated cities in the world. Now, inhabitants number just 60,000. Some of those who remain are staging a mock funeral to try to provoke the government to save the city. Talking to John Humphries on the Today Programme, Francesco da Mosto discusses the Death of (not in) Venice. As usual, it's easier to analyze the problem than to provide a solution.