Like so many archetypal symbols of quintessential America, turkeys are parodies of the gigantic, the presumptuous and the grotesque. Their arrogant, comically awkward strut has made them the proverbial metaphor of the failed theatrical production. These contradictory qualities carry over into their ceremonial role in the Thanksgiving or Christmas dinner.

Some of my happiest and unhappiest gustatory memories center on these occasions. They are the moments when even those households which pay the least attention to their food (and are therefore the least endowed with culinary skills) feel that they are nevertheless obliged, even qualified, to enter upon a complex and demanding schedule of mass catering. To compound the difficulties and increase the odds against edibility, the most critical and uncorrectable task—roasting the turkey—is often taken on by the pater familias, whose skills (if any) are usually limited to those of the barbecuer and the barman.

Some of our most eminent authorities, including Craig Claiborne in his N.Y. Times Food Encyclopedia, speak glibly of the ease with which a multitude may be fed with a roast turkey. Oh, easier with five loaves and two fishes! The means of cooking which the French found most satisfactory when first introduced to this American export, i.e. the open spit, is not available in most households, and so the enormous bird, whose various parts cook best at widely differing speeds and temperatures, is crammed into a small oven in which heat distribution is at best uneven and, when circulation is thus impeded (unless fan-assisted), may produce a bird half-raw, half incinerated. To compound the difficulties, the inner cavity is usually stuffed with a gluey substance which is perfectly designed both to prevent the circulation of hot air and to soak up the juices which could help to keep the meat moist from inside.

But no matter. What is required is a photogenic object which may be brought triumphantly to the table, a plump bird resting suggestively on its back and displaying a vast expanse of deeply browned, unblemished skin which, in accordance with the best medical advice, will be stripped away and discarded to reveal a solid block of dry fibers requiring a ladelful of stock-cube gravy to make it even remotely palatable. As the meal advances and the inner sides of the thighs are penetrated, uncooked blood oozes from the deeper leg joints, which have been so effectively insulated from the modest heat of the lower oven as to have barely warmed them. But by then the company will be so tipsy on Liebfraumilch that they would happily devour the bird unplucked.

Waverley Root, in his sadly uncompleted encyclopedia, Food, acknowledges the difficulties. In the midst of a long history of the turkey’s spread across Europe, he writes,

Roasting a turkey properly demands a good deal of skill for a number of reasons, of which the two most important are probably that turkey, unlike goose, is not fat meat and one method or another must be employed to keep it from coming out of the oven (or off the spit) too dry, and that the drumsticks take longer to cook through than the white meat. This problem exists even when you start with an old-fashioned turkey full of flavor, but such birds are becoming daily more rare.

The latter problem is one which we thought we had solved by means of our local butcher, who obtains free-range birds from a small Norfolk grower. However, the cost of these birds has been escalating year after year and last Christmas a fifteen-pound turkey—not our usual black-leg but its inferior, the bronze leg—cost us over forty pounds (well over sixty dollars). [2013: More than double that now.] When we came to eat it, we found it to be virtually tasteless, on a par with its mass-produced supermarket cousins. To compound the injury, we went to a Christmas buffet a couple of days later at which the centerpiece was a roast turkey as delicious as our own was not. Inquiry revealed that it had come from a butcher in Camden Town.

Something had to be done. This year Mary obtained the butcher’s phone number from our friends and called to reserve a turkey. Were they free range? No idea what kind of range, said the butcher cheekily, but they came from the same supplier as last year. The clincher was the cost: about half of our last year’s bird, and there was no telling to what dizzying height the price of the latter had now climbed.

And so Christmas Eve found us in a homely little butcher shop which, along with a couple of neighboring greengrocers and a small street market, serves the local Greek community. We bought a loaf of Greek bread, with the flavor and substance that all French bread used to have, and a couple of bunches of "spring greens", a tasty cabbage-related vegetable that’s much too humble to grace the shelves of an uppity supermarket. (A pet food stall, which sells items such as beef bones and unbleached tripe that are no longer legal for human consumption in Britain, may supply more two- than four-legged consumers.)

On the way back to the car we passed a Greek Orthodox Church, occupying a handsome old Hawksmoor edifice now stuffed with glittering icons, and peeked through the glass inner doors at the magnificent Byzantine spectacle of a solemn high mass. Not more than half-a-dozen parishioners were in attendance. When will the time-and-motion down-sizers move in?

HAVING broken with our tradition in the acquisition of a turkey, the next logical step was to do the same in its preparation. We had already gone so far as to follow the wise advice of Julia Child, who strongly recommends that, in order to cook the inner cavity, the stuffing remain unstuffed, cooked instead in a separate tray to which some of the bird’s juices may be added as they collect in the roasting pan. This is especially wise if the bird is to be slow-cooked through the night at a low temperature, a method which we favor because the heat thoroughly penetrates and breaks down the fibers but evaporates fewer of the juices. Once the joints are free and the juices run clear, the heat can be turned up briefly if needed to finish browning the skin.

All sorts of ingenious methods are suggested to cook the white and dark meat evenly. The conflicting factors are that (1) the dark meat contains more fat within its tissues and so will stay moist longer, (2) the bird rests most easily on its back, which puts the dryer breast at the top of the oven, which is the hottest area, and (3) the fat in the dark meat, instead of dripping into the breast where it is needed, thus drains down into the pan. Even frequent basting only applies the fat to the breast’s tough outer skin, which has already been sealed by the heat.

The compromise which is most often suggested is to roast the turkey first on one side and then the other, finishing up on its back. This is only partially successful, since only one of the legs at a time lubricates the breast and the final roasting both drains and evaporates a substantial amount of the remaining moisture from where it is most needed. And have you tried turning over a hot heavy bird on a wire rack without scorching your hands, splattering grease all over the kitchen, or bursting its skin? Even if successful, you will have pressed a lot of juice out of the bird into the pan; you can see it squirting as you try to lift it. Even the ingenious expedient of lifting it with a wooden spoon stuck into the cavity requires considerable strength and, if the bird is almost cooked, risks tearing it apart.

This year my final drastic solution was to roast the turkey all night at a low temperature, breast down, on an adjustable V-angled wire rack, with a loose covering of foil. (I had put chopped carrot, onion and celery in the cavity and, to give the bird a flavorful start, rubbed it liberally with goose fat and added a good-sized nut of it to the interior vegetables.) When the juices were clear and the joints loose, the bird was removed from the oven and put aside to set for almost two hours on the rack before it was tipped out onto the platter. (As Julia Child has noted, it stays warm, if not hot, for a very long time.)

The result was a rather unappetizing-looking bird with deep rack-lines in the breast skin, which, having been near the bottom of the oven, was pale and obviously less cooked than the underbelly. But that was exactly the purpose of the exercise! Upon carving, the leg bones pulled loose like the ribs of a juicy slow-roasted beef brisket, while the breast had a moisture-laden bounce and could be cut even across the fibers without breaking up.

As to flavor, it was noticeably less than the best of the free-range organically reared turkeys we’ve had. But the method had been proven. And, pound for pound, it was such cheap meat that we might have another turkey whenever we feel like it. Left to set until completely cold before carving, the breast would be even more juicy. And some of the more inventive ways of jazzing up a chicken might be explored. What about Turkey with 40 Heads of Garlic? 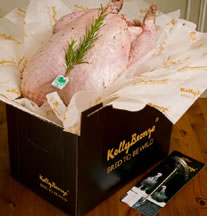 It’s gratifying to learn than Britain’s most prestigious grower and marketer of turkeys recommends essentially the same cooking method we’ve followed for the past dozen years. Kellybronze is a family firm that was instrumental in reviving the traditional bronze turkey whose survival was threatened by the tasteless monstrosities that Bernard Matthews has done so much to propagate. These birds are really free range—they nest outdoors under cover and can fly up into trees.

The Kelleys shrewdly decided that if the prosperous British housewife was to be reintroduced to real meat on the Christmas table, she would need to be shepherded every step of the way from purchase to platter.The Kellybronze bird comes in a refrigerated box containing everything you need except a pan, an oven and a robot. There’s a sprig of rosemary attached to the breast with a little medal that tells your dinner guests you’ve lashed out on the very best. These properly reared free range birds don’t take nearly so long to cook, and so there’s even a meat thermometer included. (There are other ways of telling when the bird is done, such as testing the resistance of a leg joint, but it’s very reassuring to have a number on a dial.)

This is a first class operation from start to finish, and it showed up in the superb flavor of the birds we tasted at a recent workshop. But it doesn’t come cheap—all this care and packaging, we were told in passing, will cost you an extra ten or fifteen pounds. [2013 Even more now.] In prosperous times there has been an ample market for this Rolls Royce of  turkeys, but with the bottom dropping out of the economy, it will be interesting to see whether such quality will survive. Meanwhile, fifteen quid has been known to buy us a leftover Thanksgiving free range turkey from Waitrose to go into the freezer until Christmas.

November 2013 The day before Thanksgiving I got a 12-pound goose at Waitrose, reaching its sell-by date and so reduced from over £68 to £43.74. We had £40 worth of vouchers from having used our John Lewis/Waitrose Mastercard to pay for our Croatian holiday, so this year our Christmas goose will have cost us exactly £3.74

December 2019 This year our eleven-pound free range turkey came from Aldi, at a cost of less than thirty pounds. A perfect bird, and the roasting was much easier with an external-reading electric probe thermometer from Tala.