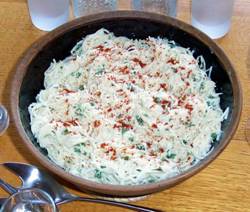 Richard Olney wrote the recipe I used to follow, but Alice Waters’ version with mayonnaise in her Vegetable Cookbook is more luxurious. And when did I ever eschew luxury?! This is my even more self-indulgent version:

Peel the celeriac and cut into julienne. (The shredding disc in a food processor produces the most easily chewable dimension.) Put it in a *big* bowl—the mixing is messy. In a separate bowl, mix the mustard, the lemon and part of the mayonnaise and cream. Stir it into the celeriac, adding more mayonnaise and cream as you go to get the consistency you want. A celeriac root can vary so much in size that precise measures are misleading. This is one of those happy recipes to which you can always add more as you go along.

I make it unashamedly in a blender, using the whole egg:

Start with the first three ingredients and slowly dribble in the oil. When about 2/3 of it has been emulsified, it will thicken to the point where the textbooks tell you to keep stopping and scraping down the sides of the jar. This takes forever. My method is to carefully insert a disposable wooden chopstick down the side of the jar while the motor is running and rotate it slowly back and forth around the entire outer edge while you dribble in the oil. The blender should be positioned where you can see straight down into it, so that you can see whether the pool of oil in the center is being drawn in.

WARNING: if you were to drop the chopstick, you could damage the blender. I’ve been doing this for twenty years and the worst I’ve produced is an occasional woodchip in the mayonnaise.

Crush the garlic and stir it into the mayonnaise after you’ve transferred it to a container. Season carefully—the amount of garlic you’ve added will affect the apparent saltiness.

Put the rémoulade in a bowl and top with the parsley.