There are great cheeses all over France, but unless you have time for a leisurely pilgrimage, the best place to find them is Paris. Which is very convenient, since Paris also has the widest variety of French cuisine. In fact, if you are planning a gastronomic tour of France, you might do well to end rather than begin in this unique city – if you are lucky in your choice of restaurants, once settled in you may not want to leave! As for cheeses, just a few shops will among them present you with a mesmerizing variety.

The unique quality of French cheese has a long history behind it. Charles de Gaulle’s legendary if apocryphal observation that it was impossible to govern a country with 246 cheeses was if anything much too conservative. Pierre Androuët, who is virtually the patron saint of French cheese, maintains that at the height of its production a few years ago there were thousands. Even within a classified area, many farms making a single variety might differ sufficiently from their neighbors to merit a separate classification.

Pasteurisation has narrowed the field, but there are more than 350 distinct cheeses identified and described in Dorling Kindersley French Cheeses, a very useful guide. Of these, only about thirty have been granted an AOC certification, and so the services of a reputable fromager are invaluable. 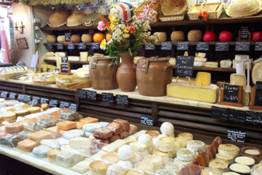 On a recent trip to Paris I chose to start with La Ferme Saint-Hubert in the 8th arr, whose compact shop [right] is adjoined by a small restaurant which packs its tables as closely as the cheeses next door. At lunchtime it was full of a jolly crowd of regulars whose bonhommie made it acceptable that my neighbor’s elbow could end up in my stomach. I chose a favourite dish, a tartalette of Reblochon and sliced potato, which could have done with several more minutes in the oven. The assortment of chevres which followed was acceptable but did not augur well for my cheese shopping next door.

I needn’t have worried. When I entered the shop, the aroma promised a superabundance of ripe cheeses. I came away with an assortment which included a mature Epoisses of an elegantly restrained complexity not normally associated with this legendary blockbuster. And there was a bleu d’Auvergne with a robust and lingering finish to rival a prize Roquefort. 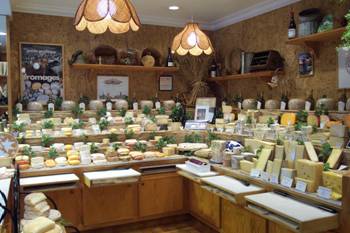 Next, a visit to Marie-Anne Cantin [left] in the 7th arr, who has written a substantial 275-page companion to her careful selection. Particularly noteworthy were two magnificently aged firm cheeses, a viex Compté 1999 and a Mimolette vieille, a hard cheese suitable for grating, which for complex and penetrating flavour rivals a fine Parmigiano Reggiano.

Roland Barthélemy’s crowded little shop, also in the 7th arr, was presided over by four formidable ladies who rapidly served a steady stream of equally formidable matrons – not a tourist in sight. On a busy afternoon, this was not the place for a diffident male with rudimentary French. But with such a large staff required, you can be sure that the cheeses are excellent and that, given the fashionable neighborhood, the prices are fair.

In Paris restaurants, the finest cheese boards are naturally in the more expensive establishments such as Montparnasse 25, at the Hôtel Méridian in the 14th arr. But there are two notable exceptions.

Astier in the 11th arr. offers excellent and hearty bistro fair which includes a generous 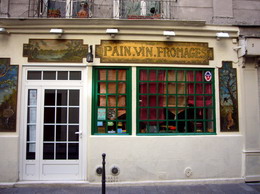 plateau de fromages [right] which is served at your table on a wire tower, like a plateau de fruits de mer. At four courses for 24.50 euros, the menu is a steal.

An excellent choice for a simple lunch is the self-explanatory Pain, Vin et Fromage in the 4th arr. It’s in a comfortable vaulted cellar, with a large well-tended selection whose constant turnover guarantees that the cheeses are in their prime. 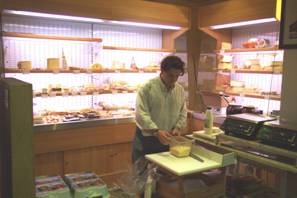 The bonus of my five-day visit was just a short walk from where I was staying, near the southern arc of the peripherique. Fil o’Fromage [left] is a small cheese and wine shop in the 14th arr just around the corner from Porte de Orleans, the south end of the No. 4 metro line. The selection is good, the proprietor speaks excellent English, and the prices reflect the less fashionable area

Great French cheeses are rapidly disappearing, and the proprietor was prepared to talk about it. New EU regulations demand structural changes in the working environment which, for the small producer, are prohibitively expensive. For instance, there must be no right angles between working surfaces and uprights – all ninety-degree joints must be converted to sweeping curves so that there are no corners in which bacteria might accumulate.

The result is that older small-scale cheesemakers are retiring early, with few of the younger generation prepared to take over from them. For instance, the famed Reblochon used to have over 200 artisanal producers; now there are only about thirty. And so the inexorable law of supply-and-demand has pushed the price into the stratosphere. This merchant is in one of the peripheral Paris arrondissements, not in the fashionable centre, and so his regular customers include pensioners who can no longer afford their favourite cheeses. He used to sell Reblochon by the complete piece, then he sold it in half-portions. Now he is prepared to sell it in small wedges, by weight: otherwise, not only would he limit his sales, but old people whom he has served for years would be deprived of one of their habitual comforts.

And so yet another traditional peasant food can now be afforded only by the rich. By the time you read this, a few more ancient cheeses will have disappeared. As for what remains, enjoy them while you can – you are eating history.