Provence: Twelve Journeys with a Gastronome 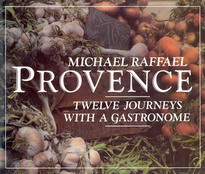 When I first encountered Michael Raffael's Provence: Twelve journeys with a gastronome (George Philip, 1990) on a remainder list (which is where all the best books seem to end up), I was put off by the subtitle. I imagined a modern Curnonsky, pouncing on a terrified maitre de and demanding his best table, without notice, on a Saturday night. "No," my informant assured me, "this is something different, something unique. Buy it before all the copies disappear forever."

She was right. In hiking clothes and toting a suitcase, Raffael buses and trudges from village to village, stopping whenever he encounters something of interest and cross-questioning the locals like a police inspector on a murder case. His search for sou-fassum, the legendary stuffed cabbage of Provence, draws him like the Holy Grail from village to village, always just out of his grasp and revealing finally that the prize, as always, had been the search itself.

He leaves the main-travelled roads and pokes about in sleepy villages such as Saorge, just off the 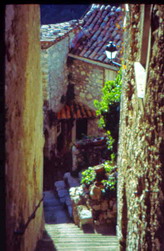 old salt road from Nice to Torino: a village perché so remote, so inaccessible that

it could never support the infrastructure of boutiques, potteries, gift shops and cafés which symbolise the annual tourist pilgrimages to those places. Instead, it is a totally unspoiled, rock-solid throwback to the Middle Ages, with no special places of interest worth visiting except for the place itself. [emphasis mine]

Carve it on the wall. It is the eternal lament for all those once quietly beautiful places that have been given "features" and thereby robbed of their identity. Saorge, inconvenient of access, still has it. Mary and I wandered for a couple of hours through its three-dimensional labyrinth of twisted lanes. Nothing to buy, nothing to do, nothing to see that was particularly different from anything else. Only an infinitely prolonged present moment of perfection.

And that, I suppose, is the essence of Raffael's book. Everywhere he goes he talks to dozens of culinary practitioners and enthusiasts: women who have spent their lives making the same little cakes, men who have carefully plucked grapes from the same vines year after year. There are hand-drawn maps that show us his routes, sepia photographs that take us back to timeless moments, extravagantly wide margins down which march the names and addresses of restaurants, patisseries, vineyards. Are they still there? Could we set out, book in hand, and revisit them? No matter. I buy copies as they appear and distribute them, like a one-man Gideon Society, to those who will appreciate them. This is a desert island book, a magic talisman that can take us back to a timeless Provence whenever we wish, wherever we may be.

[Note: Two years after I had written this, the first souvenir shop and pizza parlor appeared in Saorge. Italian day-trippers, I was told, were bringing the village a long-elusive prosperity. I shall never return.]