Who knows cooking who only cooking knows? 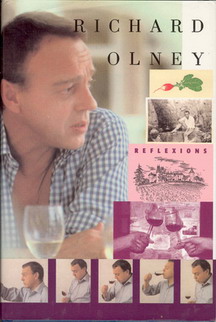 When Richard Olney’s Reflexions appeared as his last will and testament, I could imagine his friends and associates gathered for the reading, each waiting anxiously to learn whether he had inherited a blessing or a curse. Now that it has been made public, the general reader can leaf through the index, looking up familiar names and listening for the gong or the raspberry.

The long-awaited memoir reminds me of the question with which Mort Sahl used to close his gigs at the hungry i: “Is there anyone here I haven’t offended?” Why is it that truly great writers so often feel the need to end their lives by settling scores and racking up points, not only against their rivals, but even their lesser contemporaries who would be forgotten save for a posthumous jab of the stiletto? Hemingway’s A Moveable Feast is marred by this compulsion, which permeates an otherwise tasty banquet like a handful of bitter herbs. 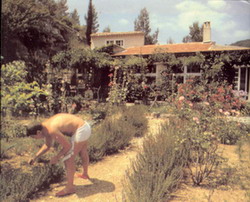 Olney positively smacks his lips over M.F.K. Fisher’s mistaken memory, an unspecified number of years later, of her nocturnal visit to him in 1970. Eyewitness accounts are notoriously unreliable. (It may even be that Olney is himself confusing two separate occasions.) Larry Adler, in his cheekily titled autobiography, It Ain’t Necessarily So, tells of an OSS mission in Berlin which he accompanied in 1945. His friend, a member of the unit, remembered it in elaborate detail as an heroic adventure; Adler’s memory was of a shameful failure in which the Brits behaved like arrogant Nazis. But the two men remained friends, taking great delight in an after-dinner double act in which they would entertain the guests with their conflicting narratives.

Surgeons, mathematicians, composers and painters may be allowed to divorce their professional competance from their personal shortcomings, but food writers are so intimately involved with our most essential activity that dehumanization is a fundamental flaw. It even goes beyond the “intellectual poverty” which John Thorne so perceptively identified in “Cuisine Mécanique”. There’s really no excuse for Olney’s hatchet job on Fisher’s intellect, palate and prose. (I suspect that Eda’s ready agreement may have been motivated by a desire to please and/or a fear of dismissal by association.) The reader learns more about Olney than about Fisher, and the outcome does him no credit.

In fact, the reflection which is finally returned by the mirror is of a perfectionist who single-mindedly reduces every person, every situation, even every historical event, to its culinary significance. There is a lack of warmth, of compassion, and ultimately of perspective which sadly lowers one of the great talents of his generation to the status of a trainspotter. He would have been incapable of writing, or even comprehending, Paul Richardson’s humane summing up at the end of his perceptive appraisal of contemporary British cuisine, Cornucopia: A gastronomic tour of Britain:

It is a hard thing to say, but fine food is far from the most important thing in the world. It is not really a question of reaching perfection – that would be too much to ask – nor of lotus-eating, but of finding and maintaining a level of confidence in the food we eat day by day that enables us to get on with the rest of our lives. I forget who said it [he later told me that it was Jane Grigson], but the phrase could apply perfectly well to [our food]: ‘We have more than enough masterpieces. What we need is a better standard of ordinariness.’