Written for a dinner celebrating the reprinting of John & Karen Hess' The Taste of America, New York, April 23, 2001
When Jeremiah met Cassandra

The natural philosophy of the huckster is cultural relativism. “De gustibus 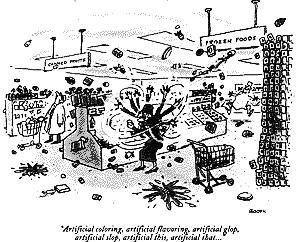 non est disputandem” is his credo, which allows every useless artifact to be judged according to its own invented standards. There need not even be a “story thus far”: each advertisement starts at square one.

For teachers anxious to establish an instant relationship with their students (or parents with their children), this has the virtue of removing all trace of criticism, so that learning becomes merely a process of accretion. In fact, knowledge need not even be cumulative – it can be disposed of as it becomes superfluous or uncomfortable; i.e., “irrelevant”. The consumer state’s ideal citizen is a graduate of the University of Alzheim.

Since it divorces habit from tradition, such a cultural environment is particularly salubrious for the food industry. The changes can be rung on a narrow scale of alternatives so as to give the illusion of variety without the threat of genuine surprise. This is true not only of prepared food taken impulsively from the shelf but also of those theme parks and recreation areas we now call restaurants. Though nothing really changes, the media can employ “critics” to hail each new nonentity as the chef of the moment – be sure to sample his cuisine before he follows it into oblivion.

Within such a milieu, professional food writers must adopt the value system of those who employ them. There are those whose private conversation is informative and stimulating, but who assume on the page a persona handed them off the peg, in which they are expected to conceal or belittle their own intelligence.

Imagine the fury with which the profession greets any of their number who dare to expose its dishonesty and mediocrity. A quarter century ago, when an investigative journalist and a culinary historian pooled their disciplines to rewrite America’s gastronomic history, the cries of anguish echoed across the nation. Not only did John and Karen Hess assemble embarrassing and incontrovertible evidence – they actually named names. The ground was littered with the shattered fragments of clay feet.

Rarely has the passage of time been so generous to a pair of iconoclastic prophets. For the millennial edition of The Taste of America, so accurate had been their diagnosis, and so little had changed, that the original text could simply be brought out in facsimile with a new introduction. Nor is this due to vagueness of prognostication; there are explicitly detailed passages which could be intercut with Eric Schlosser’s current exposé, Fast Food America, so to weave a seamless web of admonition and invective.

The Hesses’ passionate and devastating diatribe might well have concluded with Mort Sahl’s traditional closing line at the hungry i: “Is there anyone here I haven’t offended?” So many celebrated gourmets have felt their salamander breath that putting together a dinner party in their honor must have required careful management. (“Have we run a security clearance on the waiters? And check that big package from Dr. Boorstin.”)

But there is a growing realization that all is not well in the supranational food industry, and so the Hesses have acquired a burgeoning army of supporters. Mothers are starting to read labels: “Organic” on the package is an asset, “GM” a liability. Even a few gastronomic gurus are learning that pabulum can’t be transformed into ambrosia by an expensive shaving of truffle.

So let us celebrate the Hesses’ vindication while we are still able. The agribusiness think tanks are at work on their latest line of gimmicks and Linda McCartney’s Organic Gourmet Vegeburgers may already be available at a shop near you.