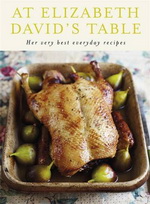 For the sixtieth anniversary of Elizabeth David’s first cookbook, A Book of Mediterranean Food, Michael Joseph/Penguin Books have brought out a newly edited selection from all her books,  At Elizabeth David’s Table: Her very best everyday recipes. Their press release announces that

This is the very first time that Elizabeth David’s recipes have been illustrated with colour photographs to reveal the richness and variety of the food that she was so passionate about. [their emphasis]

And so the two prerequisites for acceptance into the modern culinary canon are fulfilled: colour photos and passion. The latter was a word which poor Elizabeth was more likely to have used in an entirely different context. As for the sumptuous colour photos, as I leafed through this reincarnation I had visions of a ghostly figure draped in unaccustomed Technicolor, glancing about in ill-concealed aristocratic disdain.

The editor’s working definition of “everyday” suggests an establishment with lots of kitchen help. There are recipes for La daube de bœuf provencale and Bœuf à la bourguignonne that cut no corners. Both are from French Provincial Cooking, but I had to look them up to be certain—there is no bibliographical information whatsoever, either for recipes or for essays.

For the most part, the original text appears to be closely adhered to. It would have been helpful to adopt the modern practice of listing the ingredients in columns. As for their content, I haven’t compared all the recipes in detail with the originals, but the first that I checked was not reassuring. The daube recipe as it was originally published ended with the following useful paragraph which is omitted from this edition. With so much white space on the pages, there was ample room for its inclusion.

This daube is a useful dish for those who have to get a dinner ready when they get home from the office. It can be cooked for 1 l/2 hours the previous evening and finished on the night itself. Provided they have not been overcooked to start with these beef and wine stews are all the better for a second or ever an third heating up. The amounts I have given are the smallest quantities in which it is worth cooking such a stew, and will serve four or five people, but of course they can be doubled or even tripled for a large party; if the meat is piled up in layers in a deep pan it will naturally need longer cooking than if it is spread out in a shallow one.

The oversized coffee/dining table format is fashionably similar to that of Jamie Oliver’s latest—too cumbersome to use in the kitchen or to carry about and padded out with with lots of irrelevant photos. It’s designed for a public which neither cooks nor reads; lots of used copies are sure to appear soon in Amazon with nary a grease spot nor thumbprint.

This project may have been dreamed up with the best will in the world as a means of introducing an unfamiliar author to a younger generation, but the price and the format will ensure that it sells, not to aspiring cooks, but to compulsive consumers. Like so many of today's cookbooks, it comes across, not as a working tool, but as an effort at branding.

At twenty-five quid, it's rather an expensive table ornament; it would be more useful and a lot cheaper to go back to the originals. To replace our falling-apart copy of Mediterranean Food, I recently got a scarcely used copy from Amazon—hardback, modestly illustrated, in excellent condition, dust jacket intact, signature bound to lie flat—for a mere £1.45 plus postage. If you browse through Amazon, you'll find that the cheapest available copies of her first five primary books will set you back even less—a not-so-grand total of £1.42 plus postage.

Before my copy of  At Elizabeth David’s Table arrived I went back to Chris Patton’s In the Footsteps of Elizabeth David, first broadcast in 2001, and to Jancis Robinson’s brave but disasterous attempt to interview her. What came across was a sad, lonely woman who over the years had single-mindedly chronicled the Southern European cuisines that gave her one of her few lasting pleasures. With her ardent distaste for public exposure of any sort, it’s doubtful whether today, among the legions of glad-handing chefs, she would have found either a publisher or a public. Nevertheless, for me she’s one of those great English eccentrics whose personal foibles were an essential ingredient of the dogged determination with which she worked, year after year, to preserve the values and traditions that had given her such comfort in austere postwar Britain—and, with increasing scholarly devotion, to getting them absolutely right. The format of her recipes may be old-fashioned and they may be written for cooks who are sufficiently experienced to fill in the missing details, but in my book she deserves lasting respect. We may never know just how important she was in opening up the windows of austere English kitchens to those warming breezes from the south.

A couple of online reactions from other food writers whose names you would recognize if I were to include them:

For me, a great deal of the appeal of Elizabeth David lies in the original, small, unpretentious volumes illustrated with b/w drawings. What good news that they can still be found, and so cheaply.

Your review is right on the nail. Nobody would bother to publish her today ...and your passion+colour photo jibe is perfect. What you may not have picked up on yet is the next online phase. Dslr cameras can now shoot hi-res movies and  the glossy mag and coffee table book pic. will soon be as dead as Gourmet Magazine. Bon Appetit!

To which I responded:

I become increasingly convinced that there is now an irreconcilable gulf between writing well and writing saleably. I don't think that in the old days the general public was any more intelligent, but there were quite a few editors who regarded themselves as joint conspirators, along with their authors, in the ongoing struggle to keep standards as high as commercial pressures would allow. Today, more and more of the editors are kids fresh out of business schools who regard the text as mere filler between the photos.