One Old Salt to Another

FOR a century salt cod was the backbone of Provincetown’s prosperity. Aft 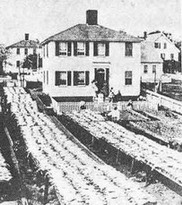 er whaling moved to Nantucket and New Bedford, the town continued to produce the basic food supply for the sugar plantation slaves of the West Indies. Even after slavery was abolished by the British, French and Dutch a couple of decades before the US got around to it, odoriferous displays of drying fish – as in this old scene just a few blocks along Commercial Street from the house where I grew up – still dominated the landscape.

The salt cod that went to feed the slaves had to be cheap, and so the processing was quick and careless. Henry David Thoreau visited a Provincetown fishery two centuries ago and wrote laconically of its quality control:

The cod in this fish-house, just out of the pickle, lay packed several feet deep, and three or four men stood on them in cowhide boots, pitching them onto the barrows with an instrument which has a single iron point. One young man, who chewed tobacco, spat on the fish repeatedly. Well, sir, I thought, when that older man sees you he will speak to you. But presently I saw the older man do the same thing.

Bacalhau (salt cod) is such an integral ingredient in Portugese cuisine that there is reputed to be a different recipe for every day of the year. However, among the Portugese who fished from Provincetown, these dishes were largely absent. Perhaps it was because they knew too much about the unlisted ingredients! In 1983 Mary Alice Luiz Cook, a local fisherman’s daughter, wrote down a collection of Provincetown Portugese Recipes which she realized were in danger of disappearing. There is not a single salt cod recipe among them. (see footnote)

Provincetown’s most famous chef, Howard Mitcham, is explicit about this in his Provincetown Seafood Cookbook:

Although Provincetown made tons of it for export they ate very little of it themselves, and never developed an extensive salt codfish cuisine; they made an occasional salt codfish hash for breakfast and that was just about it. With all the fresh fish and shellfish around, Provincetown did not have to lean too heavily on the preserved varieties.

He goes on to apologize that the bacalhau recipes for his book had to be borrowed from Spain, Portugal, Provence and Italy. 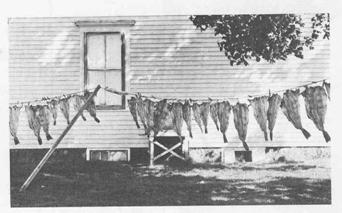 THERE was one variation which continued to be made in Provincetown up to my own youth. This was Skully Joe, a lethal weapon you could “bend lead pipe around”. By this time commercial salt cod had diminished in pungency, prominence and profitability; but “fisherman’s candy” was still hung out to dry in a few back yards. Captain Kemp, the old clipper ship skipper next door, kept the ceiling of his shed hung with it like stalactites in some prehistoric cave. Sometimes he would give me a rock-hard hunk to suck on and its briney quintessence of fishiness would keep me occupied for an hour or more.

When I first encountered salt cod in the south of France, my experience with Skully Joe led me seriously astray. I brought a bag of it home and put it away in the garage. It was midsummer and an odd smell gradually suffused the car’s upholstery. By the time I had located the source it had practically been reduced to Roman garum. Skully Joe would still have been suckable come judgement day.

FOR those with hardy determination and laid-back neighbors, Mitchum gives detailed instructions on how to make this formidable snack. If you undertake it you may be able to corner the market; even the Ptown Portugees don’t make much any more.

THE MAKING OF SKULLY JOE

You should use cod, haddock, or pollock of 1 or 2 pounds in size. Since it's hard work you should make a batch of a hundred or more. (Don't go mooching them from the poor fishermen; shell out some cash and buy a boxful when the price is right.) You don't have to scale them or cut off the fins. just cut off the head and gut them by splitting down the body to about an inch below the vent hole. After scraping out the innards you hold them under a running faucet, and, using a toothbrush, brush off the stomach lining and blood, and most important of all, the blood clots near the backbone.

Next you make a brine of the quantity needed to cover your fish. The old Cape Cod way of making brine is to lay a medium‑sized potato on the bottom of the container, fill it with water and then add salt and stir slowly until the potato rises to the surface and floats. (A quicker way to approximate this is to use 1 quart water to 1 pound of salt.) To make Skully Joes easy to handle you tie them together at the tails by twos with strong cord; they are slick when they come out of the brine, and the cord with a fish on each side also provides a handy way of hanging them up. You soak them in the brine for 12 to 20 hours, then you hang them out in the back yard on the clothesline for 3 days of sunshine. Moisture must be avoided at all costs; take your fish in at sundown to avoid dew and frost and if it's rainy or foggy do not put them out at all.

If there are any bluebottle flies around, they usually won’t attack a well‑salted fish, but just to be doubly safe you should pack about 1/4 teaspoon of salt at the upper end of the split by the tall, which is where any residues of blood or oil are most likely to seep out. At the end of the third day of sunning you can move them to a shed, or an attic or a cellar; drive nails in a rafter or joist, and drape a pair of fish over each nail. (Do not put them in a furnace room or they will dry out too fast.) At the end of 10 days they should be ready to eat.

And there's also the fine old Yankee version of sugar cured Skully Joe. To achieve this effect you add a pint of Porty Reek Long Lick or long tail sugar to each 2½ gallons of brine. Porty Reek Long Lick and long tail sugar, of course, is old Cape Cod lingo for molasses. Or you can just use a pound of sugar. Now this kind of Skully Joe really will draw flies, so you must build a screen box to dry them in. Didn't I warn you this business could become complex?

I didn't warn you that Skully Joes throw off a very strong smell. After the cure is finished, they should be stored in airtight plastic garbage bags and hidden in some far off corner of the house, say the garage, or the tool shed. To eat 'em you take a sharp pocket knife and cut off a chunk and chew on it. Or if you want to be dainty about it and you happen to have an electric table saw, you can saw them up fast into bite-size squares. Dear Emily Post and Amy Vanderbilt, I know your ghosts is shudderin' at this salty old Cape Cod custom of Skully Joe, but that's how it is, take it or leave it.

2006: A reader tells me that he has paid $90 for a copy. Apparently he got a bargain—copies by way of ABE are currently going from $129 to $432. Tulipomania! Howard died ten years ago. If he were still alive, he'd be auctioning copies and drinking the proceeds.

Footnote: Mary Alice Cook’s Traditional Portugese Recipes from Provincetown is introduced by Grace Goveia Collinson, who was the first Provincetown Portugese fisherman’s child to graduate from college. Shortly thereafter she was my fifth grade English teacher and helped me form my life-long excitement in the presence of good writing. It wasn’t until half a century later, when we spent half the night getting reacquainted, that I learned how her unique scholarship to Mt. Holyoke had carried with it the condition that she renounce her church. What cultural arrogance those puritanical do-gooders were capable of!