Cheese and wine are a classic combination. There are long lists of pairings reputed to go well together, and others that are to be avoided. A recent comparative tasting of British Columbia cheeses and wines by an august gathering of twenty-seven experts got worldwide attention. For a cheese lover, the high point in a great restaurant meal can be the moment at which the cart comes round and a selection is made to be savored at length.

Wait a minute! What’s wrong with this picture? There are now perhaps half-a-dozen cheeses on your plate, and only one wine to drink with them, probably the robust red that’s left over from your meat course. If you find that it complements them all, chances are it’s in the timing—you’ve drunk so much that it would taste just fine with raw oysters and chocolate sauce.

Among the upwardly mobile, whatever the food or the occasion, fine wine is overwhelmingly the choice for conspicuous consumption. Has the Dow Jones just gone up a hundred points? Bring on the Chateau Petrus! But sometimes a dissenting voice is heard. Dr. Hildegarde Heymann, Professor of Sensory Science (what a dream job!) at UC Davis, had the temerity to put a grad student onto a research project which actually tested wine-cheese compatibility—not which wine went with which cheese, but whether the pairing was a good idea in the first place. For every session, the panel started sober. To the acute embarrassment of any culinary expert who happened to be paying attention, controlled experiments revealed that in virtually every instance the cheese killed the wine. A better sensation in your mouth, I suppose, than prolonged equal combat.

That the legend of wine-cheese compatibility refuses to die may be the result of what Professor Heymann calls “cognitive effect”. That’s a polite way of saying that we make it up. As in most aspects of our daily lives, our judgements are predetermined by our desires and expectations. 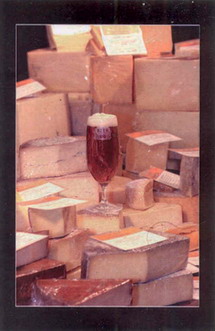 So what beverage does indeed go best with cheese? A clue might lie in its obscure origins. One of the oldest forms of artisanally created protein, cheese was probably invented/discovered by the ancient Sumarians, the first major agriculturally-based civilization. The grain which fed the cattle that produced the milk from which cheese evolved (circuitously by way of the rennet in the cow’s stomach) would have been the same grain that produced another great Sumarian invention—beer.

All well and good—but how do you hook the gastrosnobs? Beer is what lager louts swill by the pint and then relieve themselves of in the alley. Compared to wine, it’s a giveaway beverage—who ever laid down a case of beer in the expectation that after a few years it would be worth a fortune? And so to raise the tone, the royally appointed cheesemonger Paxton and Whitfield teamed up with Coors Brewers Beer Naturally for a press tasting of English, French and Belgian cheeses paired with English, Belgian and German beers. It took place in the P&W boardroom above their ancient Jermyn Street premises, where gentlemen in hundred-quid shirts tailored just a cricket pitch’s length away were stocking up on Stilton as though it were about to be outlawed by Brussels.

Upstairs, eight places were laid out, each with a single cheese and beer together with biscuits and sliced bagettes. The pairings ranged from a delicate creamy Brie de Melun with a crisp Grolsch lager, to a pungent Brie de Meaux with a formidable Fuller’s Limited Edition Vintage Ale at a whopping 8.5% alcohol. In between was a perfectly matched pair of English classics—Quicke’s Mature Cheddar with P&W’s No 93 Ale. But the star of the show—loved by some (including Mary and me), hated by others—was the stunning juxtaposition of a soft creamy St Felicien goat’s cheese with a Liefmans Frambozen (raspberry) beer from Belgium. It was rather like spooning up a vanilla ice cream sunday, only better! 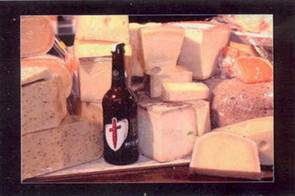 Among the English beers, I was delighted to see the once-threatened Worthington White Shield. When I came to London forty years ago I discovered this sedimented beer with a flavor much like what I had made in Berkeley. (I had a cellar that maintained the right temperature and humidity the year round.) An English barman exhibited his skill, I was told, by pouring a White Shield without disturbing the sediment. Years later in Belgium I was introduced to a similar beer, but this time I was told to remove the cap, put my thumb over the top and shake it vigorously. De gustibus.

The evening was a salutary reminder that a fine beer should be savoured like a fine wine—you are not obliged to polish off the bottle at one go. The glasses provided, though tapered from the foot in beer-glass fashion, were the size of medium wine glasses.

But the most interesting discovery came when I started circulating from station to station, sampling cheeses and beers at random. With few exceptions, every cheese went at least acceptably with every beer—according to Janet Fletcher, "intolerable mismatches are rare." The key, I realized, lay in the fact that their very structure was complementary rather than contrasting.

Modern taste directs that we match the relative sweetness of most pre-dessert courses with a dry wine; this difficult task has lead to lengthy tomes on how to achieve the near-impossible. It is this frame of mind that has prepared us for the culinary acrobatics of molecular gastronomy, whose object is the paradoxical and spectacular marriage of incompatible opposites.

Nineteenth century tastes, on the other hand, dictated that the sweetness of the wine should complement the sweetness of the sauce, so that they would go harmoniously together. As a result, the finest German Rieslings, with their balance of sweetness and acidity, were even more highly prized than the French clarets, which required long maturation to overcome their tannic astringency. It was a cuisine in which the various components of a meal existed in harmony rather than slugging it out in a gastronomic war game.

In the course of the evening I learned a valuable lesson. As a part of my daily diet, I can no more afford the luxury of Paxton and Whitfield’s twenty-quid-a-kilo cheeses than I can knock back vintage claret; but the cheeses that fall within my budget can be paired with the best of bottled beers, costing rather less than a decent wine and sippable in modest quantities with equal or greater satisfaction. I can even reach for the bottle blindfolded, knowing that the odds will favor a complementary pairing. I prefer the simple life.

POSTSCRIPT: Sumeria, home of cheese and beer, was of course the area now included in southern Iraq. The Western superpowers are presently thanking their descendents in their own peculiar way. But the Iraqis, ancient and modern, are getting their revenge.

The great Sumerian discovery that changed the course of human history was irrigation. They did it so intensively that the accumulating salt ultimately made the soil infertile. Exit Sumeria.

The human race, having learned only half the lesson, has been repeating the cycle ever since, thus destroying an astronomical number of previously fertile acres. Runaway technology is rapidly emptying the ecological bank account. Will the last human left alive please turn off the tap?