Still whistling in the slaughterhouse 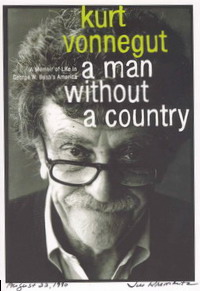 Kurt Vonnegut has lived a pretty funny life. As a teen-age POW he survived the riotous bull-in-a-china-shop destruction of the delicate city of Dresden. After he returned home, his mother, having given some pretty broad hints, committed suicide (on Mother’s Day!). In the 1960s his only son Mark went through four psychotic breakdowns, which he eloquently narrated in The Eden Express. During the next decade Kurt’s sister lost her husband in a car crash and dutifully followed him to wherever he might be, dying of cancer the very next day. In the eighties Vonnegut tried to join the world’s losers by committing suicide. He was unsuccessful, so God lent him a helping hand by burning his house down. Alas, his lungs were so preconditioned by unfiltered Pall Malls that the smoke couldn't do its job—for them it was just another day.

Homeopathically dosed with a regimen of personal tragedies, our antihero settled down to die laughing. But the twenty-first century proved to be beyond a joke. Up to then, the disasters had been localized and transitory, but this time the threat was both global and eternal: America's hogs-in-chief were leading the world’s swine in a Gadarene stampede into the abyss, taking the cliff with them. And so the grinning corpse —“I was so dead I stank!”— resurrected himself for a final blast on his battered doom trumpet.

The old codger can still blow up a storm. Why hasn’t he been silenced? How come he’s not on the NSC no-live list? Too risky. He may have declared himself a man without a country, but he’s still got a loyal American fan club. As for his would-be assassins, they're laughing so hard they can't shoot straight. He’s not eligible for a Nobel Prize, he tells us, because he’s a bankrupt Saab salesman. What a waste! We’ll never hear him swapping Bush jokes with Harold Pinter at an NP reunion.

Crazy seems to run in the family. Kurt’s unsettled son Mark, who went on to become a pediatrician, gave an amazing speech in 2003 to the National Alliance on Mental Illness in which he catalogued his loony relatives, all four generations of them. (His “famous father,” he says, “is not manic depressive. He’s not particularly well, but he doesn’t hear voices or get all pumped up.”) Mark goes on to tell us—and this is a no-no in our narcissistic era—that when loonies like van Gogh produce great art, it’s not the result of their madness but of their successful battle against it.

Wow! What a kick in the gonads for all those bedlamites who wallow in their collective dementia! His father Kurt is hyper-tuned to these self-celebratory wankers, and he sees that they're running the whole shmear:

Our country...might as well have been invaded by Martians and body snatchers.... It has been taken over by means of the sleaziest, low-comedy, Keystone Cops-style coup d’etat imaginable....

Those now in charge of the federal government are…psychopathic personalities, or “PPs.” To say somebody is a PP is to make a perfectly respectable medical diagnosis, like saying he or she has appendicitis or athlete’s foot.…

PPs are presentable, they know full well the suffering their actions may cause others, but they do not care. They cannot care because they are nuts. They have a screw loose!. Many of these heartless PPs now hold big jobs in our federal government, as though they were leaders instead of sick....

War is now a form of TV entertainment, and what made the first world war so particularly entertaining were two American inventions, barbed wire and the machine gun. Shrapnel was invented by an Englishman of the same name. Don't you wish you could have something named after you?...Napalm came from Harvard. Veritas.

Our president is a Christian? So was Adolf Hitler. What can be said to our young people, now that psychopathic personalities, which is to say persons without consciences, without senses of pity or shame, have taken all the money in the treasuries of our government and corporations, and made it all their own?

To celebrate his positively last book, Vonnegut gave a positively last address to the students at Ohio State. About 4,000 of them turned up, only half of whom could be admitted. It was the biggest crowd for a lecture (as opposed to a football game or a pop concert) since Michael Moore.

Before he began, Vonnegut stage-whispered to the professor who was introducing him, “What can I say here?” He was given carte blanche. “Well,” said Vonnegut into the mic, “I just want to say that George W. Bush is the syphilis president. The only difference between Bush and Hitler is that Hitler was elected.”

Sick? You call that sick? There are holocaust survivors that make him sound gemutlich. A college friend of mine who crawled out of a Nazi concentration camp through the sewers—he was a tiny child made even tinier by starvation—often amused himself by loudly singing the praises of Hitler at shocked campus parties. (This was in 1951, when there was still a whiff of cyanide in the air.) Half a century later another survivor revealed to me his favorite joke: “How many Jews can you get in a Volkswagen?” “Two in the front, two in the back, and six million in the ash tray.” Kurt Vonnegut has still got a lot of wiggle room.

P.S. I wrote this after coming home from the funeral of an old friend who had died without warning. It wonderfully concentrates the mind.

NOTE: The last time I checked the Google small ads at the top of this page, they were for patriotic support-our-troops web sites. Search engines don't do irony.