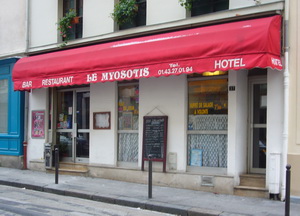 This round trip to Paris I made by overnight bus. Not only is it cheap (only £56 for us Golden Oldies), but it allows the maximum time in situ and saves two nights’ hotel bills. I had to be at the depot by ten p.m., so the most convenient place to have dinner was at Le Myosotis, a Moroccan hotel/restaurant just around the corner from where I was staying. It started serving at seven, which would give me a comfortable three hours to eat, pick up my bags and take the metro to the station.

It was a restaurant I’d been ignoring for the several years I’d been staying regularly with Frank in the 14th – after all, I don’t come to Paris to eat what I can get just as easily in London. But this time there was the double attraction of convenience and economy. With the pound sterling in free fall, in five days I’d spent half again as much as on my previous visit. 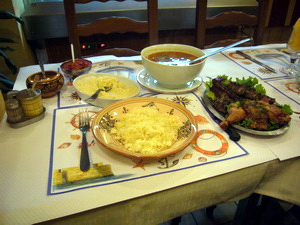 The most expensive couscous on the slate was the Imperial at 15€, which included all five of the meats on offer. What the hell – go for broke! In just under half an hour they arrived, fresh from the grill. Each was a symphony of flavour and all were done to tender perfection. The couscous was light and perfectly separated. There was a huge bowl of vegetable stew, more than I’d had altogether in five days of French dining. A separate little dish held the requisite harissa to spice it up according to taste;whether it included the legendary aphrodisiac ingredients I am unable to report.

What a meal, and for what a price! It’s no wonder that couscous has become for the French what curry is for the English – a cheap culinary alternative with a long tradition of skill behind it, served up by ill-paid hard-working immigrants. It was ever thus. Not so many years ago Parisians were being fed by economic refugees from France’s southern provinces and today their restaurant kitchens are full of Chinese skivvies. Aside from a handful of would-be-celebrity chefs,

who else is prepared to cook for a living?