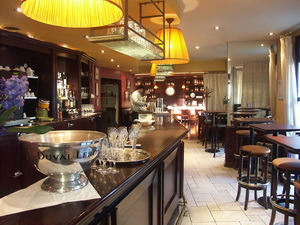 In Paris, Monday night is a time when most of the good small bistros are closed, so I settled for Millésimes 62, a Pudlo “Special Favorite” not too far from my accommodation in the 14th. As soon as I entered, it was apparent that the author of the enthusiastic write-up must have been, not the eminent Monseur Pudlowski himself, but perhaps a sprightly young stagiere. (The restaurant's name wasn't even spelled correctly.) Its website, which I wish I could have consulted in advance, boasts of its “Jazzy atmosphere”. This was affirmed as soon as I entered by a hip American chanteuse who serenaded me from an overhead and over-loud speaker during my entire meal. None of the pretty young waitresses could tell me who she was. 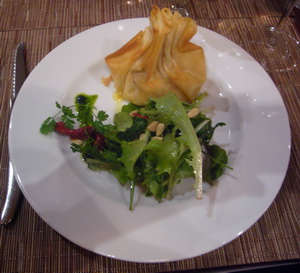 I opted for the Menu du Marché, which suggested that it might offer something fresh. The first course, Croustillant de brie de Meaux, was a crisp pastry case containing a certain amount of the specified cheese with a decent little side salad, the sort you might get anywhere. The second, Cappelletti au boeuf, crème de Parmesan, was a gesture in the direction of Italian cuisine. The small helping of mini-raviolis contained an equally small quantity of anonymous

meat – what a witty air steward on Air Canada had once identified over the blower as “some form of animal protein”. The Parmesan sauce that accompanied them had apparently been made as weak as possible so as not to overpower the beef. Finally, the Nougat glace au miel, coulis de fruits rouges suggested that the bees were on strike. The coulis that surrounded it might have been anything red.

Nothing on the plates suggested that the chef need have gone to the market that morning for anything other than, perhaps, the salad greens. It wasn’t a terrible meal – just an anonymous collation that I might have had at any airport. That’s not what I go to Paris for.