affrioler, v.t. To allure, to entice, to attract as with a bait.

An enthusiastic recommendation from Patricia Wells and inclusion in Jeffrey Steingartens short list were bait enough for me. The chef who aroused their enthusiasm had moved on, but a red-starred entry in Time Out assured me that the new owner was keeping up the standards. In the event the gamble paid off and Mary and I, with friends Hugh and Meg, enjoyed a meal of considerable pleasure and sophistication. 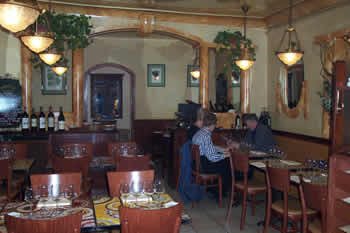 Compared with a typical bistro, the architectural ambience is rather more ambitious but also somewhat ambiguous. The molding surrounding the arches and windows is of a simplified and scaled-down baroque splendor, while the table tops are a rather folksy mosaic, hand-crafted by a friend of the original owner. This sounds like a recipe for aesthetic disjuncture, but the predominant brown/beige color scheme, including solid curved-back wooden chairs, brings potential conflicts into harmony.

In fact, both th 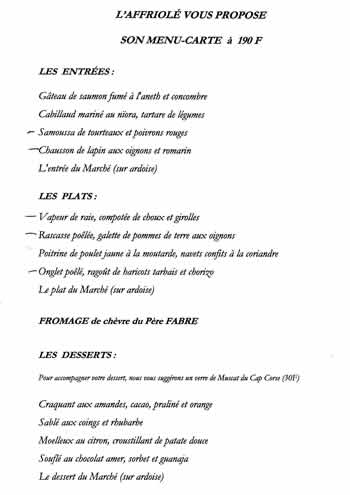 e ambiance and the menu make this a bistro to which you could bring a wide range of guests and be reasonably confident that they would feel comfortable. The dishes Mary and I had between us were imaginative  crossover even  but not weird, and were well executed:

As the room filled, the service remained as friendly and as competant as when, upon our early arrival, it was empty.  This was yet another verification of our sources. But that shouldnt be surprising. Throughout our Paris dining we have had a luxury usually denied to professional restaurant critics  the priviledge of ignoring the newest and most fashionable and patronizing simply the best.