The Lair of the Leopard

Sicily, one of the poorest regions in Western Europe, is best known to many through the memoirs of an aristocratic literary dabbler who magically transformed himself into a highly successful one-off novelist after he was bombed out of his ancestral home by the Allies in 1943. The Leopard, the perceptive family memoir of Giuseppe Tomasi di Lampedusa, would be famous only among Italian readers were it not for the remarkable three-hour film by Visconti, himself an Italian aristocrat, who saw it, says one of the actors, as his own story. 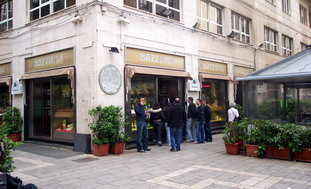 Today thousands who wouldn’t recognize Lampedusa's name follow in his footsteps. One of his favorite hangouts was the lap-of-luxury pasticceria (sweet shop), Bar Mazzara, which turned out to be only a block from our hotel. 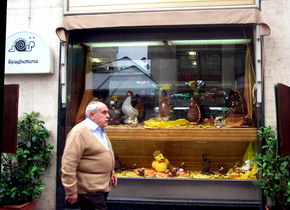 Crowds  go there for simple snacks or filling lunches, followed perhaps by a selection of incredibly rich and calorific cakes and pastries. Lampedusa is said to have written much of The Leopard while sitting in its comfortable marquee; surviving photos do not suggest that he thereby reached the proportions of some of his fellow-habituées [left]. 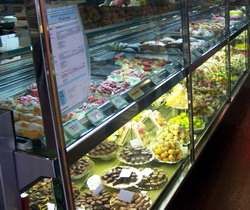 Inside there were long glass cases full of sweet-lovers’ wet dreams. After a mouth-watering exploration, Mary selected a raspberry torte which she later attempted to order from the menu. There was a misunderstanding, and what arrived was a wedge of cake with masses of whipped cream (the sort that comes out of a pressurized dispenser) with half of a not particularly ripe strawberry on top. The cake's flavor and texture could not possibly have been mistaken for that of homemade. 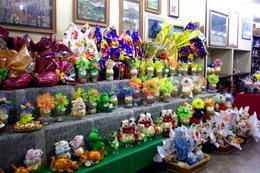 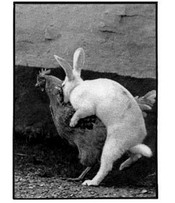 Downstairs in the basement [left] was a mile-long shelf of Easter eggs. In a corner near the door was the Easter Bunny’s helper, assembling and wrapping the baskets. And somewhere out back [right] was the factory.