Shanghaied at the Shanghai 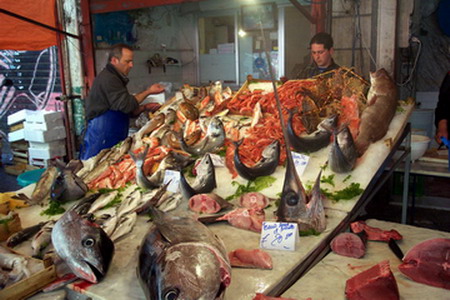 The most amazing thing about the fish stalls in Palermo’s Vucciria Market is the smell—there isn’t any, or at least not the sort one associates with London’s seamier fishmongers. This is a poor country and fishermen don’t seem to drive around in refrigerated lorries. In fact, in the market there was no sign of refrigeration of any sort—in this stall the fish were laid out on a big flat surface without ice. From time to time a stallholder sprinkled some water from a dirty basin. In early April it was warm but not hot; in August it might be a different kettle of fish.

Sicily is home to the biggest part of Italy’s fishing industry, both the fish themselves and the boats that go out for them, and so it’s not surprising that a lot of seafood is consumed locally. The paucity of fish-miles no doubt contributes to its freshness. The rapidly contracting supply has led to massive price increases, especially for the rare and most desireable species. In an expensive restaurant such luxuries as swordfish and lobster will cost you several times as much as the common everyday anchovies, sardines, hake, cuttlefish and mussels served in a modest trattoria. Sardines being plentiful and cheap, pasta con le sarde is an omnipresent and constantly varying dish. But poverty in Sicily knows no bottom line: there is also pasta con le sarde a mare, in which the sardines haven't left the sea!

Looking at all those fish made me hungry, and so we sought out the Trattoria Shanghai just above the main market square. Fred Plotkin’s excellent Italy for the Gourmet Traveller describes it as “a very raffish, rough-and-tumble place with good food at low prices”. His description of the ambiance, if not the cuisine, proved to be ominously accurate: without his recommendation I would never have ventured up those depressingly grubby stairs. 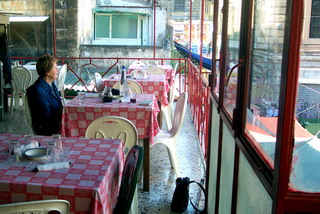 The upper floor opened out onto an enclosed balcony overlooking the market below. The room itself was not unpleasant and the menu offered the sort of simple fare we were after. I decided on pasta con le sarde, to be followed by gamberoni (giant prawns). Mama came to take our order and asked if we wanted antipasti. Having seen the meagre display as we entered, we declined. When we asked for the gamberoni she insisted that the mixed fish grill would be better. Who was I to differ with an expert? 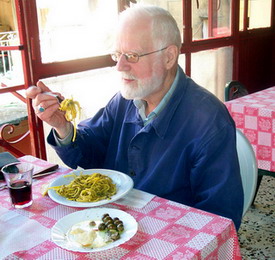 An unordered dish of olives arrived, together with a few small rounds of nondescript bread. The olives were OK. After a long wait and an indecipherable apology  came the pasta. A good strong multi-layered flavor. 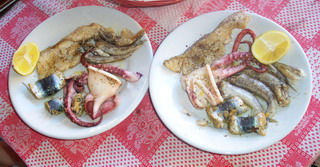 Then the grilled fish, which consisted largely of cuttlefish rings and tentacles of a resilient rubberiness.

An English couple took an adjoining table, no doubt led here by Fred Plotkin. When our bill arrived, we found that we had been charged for the olives we hadn’t ordered, and a cover charge bumped up the bill to well over 30€—cheap for London but high for such a low joint in Polermo. I can only surmise that Mr. Plotkin’s well-intentioned plug had brought in a stream of gullible punters and that mama discovered they’d eat anything and pay anything for it.

But not more than once. If my warning has saved you from a bad overpriced meal, then our rubbery tentacles will not have been masticated in vain. If on the other hand you still must climb those dingy stairs, then ask any stall holder for the Trattoria Shanghai. He’ll happily direct you down the narrow alley in the corner of the square, no doubt winking at a neighbor as you depart. Providing you stick to the house wine and the pasta con sarde, you may even enjoy it. But don't show up with just a credit card—you might get fitted for concrete wellies.