In rural France, the legendary bistros are disappearing. There are now 45,000—a fifth of the total 30 years ago—of which at least 5,000 are expected to sell up this year. At that rate, in ten years they will all have closed down, transmogrified into “theme bars”, or become links in the fast food chain. Even those that remain threaten to become empty shells into which will be poured the anonymous culinary products of the wholesale cash-and-carry firms such as Metro and Brakes Bros. 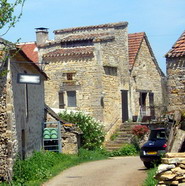 Three years ago, Thierry Roger, a French restaurateur with experience in New York and London, decided to buck the trend. Taking over an old dry stone barn, he cleared out the merde and installed a kitchen in an adjacent outbuilding. Anyone who knew the property of yore might not spot the changes: only a tiny fabric sign, fading in the sun, suggests that a herd of cows is not likely to be coming in for milking. 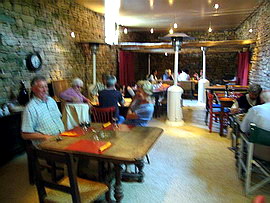 Inside, the massive stone walls are pristine and unadorned. In a modest gesture towards relative comfort, there are two outdoor space heaters—the sort designed to grant rich alfresco barbecuers in northern climes the right to bare arms—and just above these is a tightly stretched fabric ceiling to keep the expensively produced heat from dissipating into the ancient roof beams. A notice on the back of the menu card reminds us that this is indeed an old barn, that the heating is rudimentary, and that we should “request any adjustments necessary for [our] comfort”. Is there a rack of fur coats at our disposal?

But no matter. As our earthly globe warms up, even this stony auberge will require coolers rather than heaters. On a balmy spring evening, Hugh and Meg and I relaxed happily in lightweight jackets and sweaters.

The menu cards on the table offered four courses and wine for a modest fifteen euros. Had we perhaps entered a soup kitchen in Plato’s heaven? For a first course there was a choice of “peasant cake” or crispy pastry with duck; then veal stew with lime or roast duck with cumin; a cheese course; and finally a desert of apple tart, apple crumble or rice pudding—ah, those invading Anglo-Saxons!

it had to be duck all the way. My entrée contained the dark meat, the flesh shredded and succulent, the crisp flaky pastry disappearing miraculously on the tongue. Next, a front quarter, not half-raw as in fashionable Paris, but cooked just past pinkness, still juicy and easily cut from the bone. Devoid of shame, I gnawed the wing and carcass like a Tudor monarch, but genteelly returned the bare bones to my plate rather than tossi

ng them over my should

Hugh and Meg were equally enthusiastic about the savoury “peasant cake” and veal stew. No foam, no towers, no squiggles of coulis around the plate rim—just appetizing food, ready to be enjoyed. 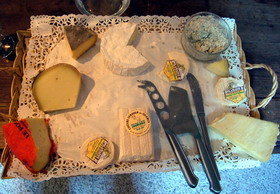 The cheese arrived, not in meanly set out little portions, but on a tray of a dozen mostly local varieties, which was left at the table. The fresh chevre had come from a farm within bleating distance. 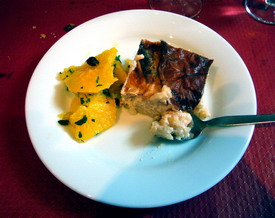 M. Roger had promised great things of the rice pudding: slow-cooked, with milk added in stages as it evaporated, and finishing with a brown skin—in fact, just as Mary makes it. The result was so good as to risk my banishment if I were to report it to her too enthusiastically.

There was a wine list for the fussy or the ostentatious, but we were happy with the local plonk dexterously poured from open jeroboams on the sideboard. 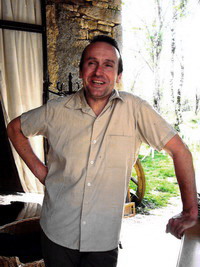 On the way out we stopped to pay our respects to the chef, M. Roger’s wife. She, we learned, had picked up her considerable skills in the course of three years of self-instruction. Thierry, meanwhile, has learned to balance a dozen empty wine glasses up his arm. Whence comes their talent? How can they offer so much for so little? Can this establishment actually support them? Such questions are academic. The auberge is only open Friday and Saturday for dinner and Sunday for lunch. They are surely laying up for themselves treasures in heaven, where someday, to a celestial fanfare, they will open the