Sweetness and Light come to Mayfair 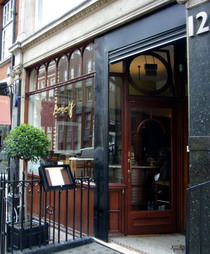 The instantly successful Arbutus in mixed-market Soho has, after a couple of years, trailed into deepest Mayfair (Trailing arbutus [Epigaea repens]—get it?), where it is sweetening upper crust palates with Wild Honey just a couple of doors away from Sotheby’s. Long-time restaurant partners Anthony Demetre and Will Smith seem to know how to strike the right balance between the posh and the plebeian, the luxurious and the economical, in whatever neighborhood they occupy. Only a couple of weeks into their latest venture, it had the settled-down feeling of a restaurant that had been there forever. At 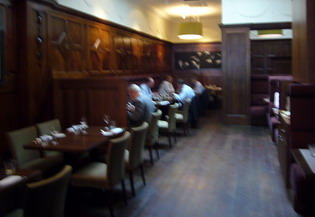 our Tuesday lunch virtually all the tables were full, mostly with what looked like London’s owners and administrators from neighboring offices. (In that respect it reminded me of lunching at l’Arpege in Paris, at virtually ten times the price.) The dark wood panelling enveloped its new occupants reassuringly—this was once a gentleman’s club and it still shows it.

Not that the service is in any way snooty. I tested our friendly young waitress’ flexibility by announcing at the offset that I wanted three starters, adding that I didn’t expect the rhythm of my meal to match that of Mary’s more orthodox starter plus main. No problem at all—she didn’t bat an eyelid.

That gave me the option of assembling my own menu degustation. (When a celebrity chef does this for you, it doubles the price.) Previous experience at Arbutus, plus advance reports from eGullet’s dedicated foodies, had already decided me on the mackerel tartare, followed by the braised pigs head, and ending (pre-dessert) with the boudin blanc. Mary, meanwhile, went for soupe au pistou followed by vegetable risotto. That would give both of us five savory dishes to sample. 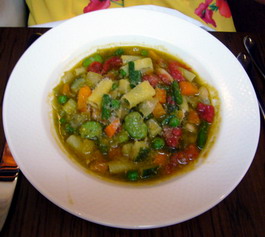 Mary’s Vegetable soupe au pistou, Baux de provence olive oil was a great beginning: she counted nine vegetables in such liberal quantities as to make it virtually a stew, and each cooked to exactly the right degree. The flavours were separately identifiable but also came together in such a way that each mouthful tasted slightly different, depending on what your spoon happened to pick up. After a couple of generously shared spoonfuls from Mary, I would have lingered over it long and happily. 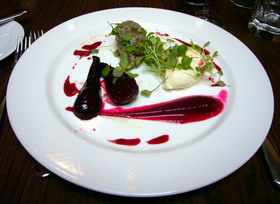 My Mackerel tartare, beetroot and horseradish was a slight disappointment in that I found the flavours restrained to the point of blandness. I associate all three of these ingredients with a robustness which in this dish had somehow been ‘gentrified’. But other reviewers have responded differently; Mary tells me that my palate is jaded by too much chili. 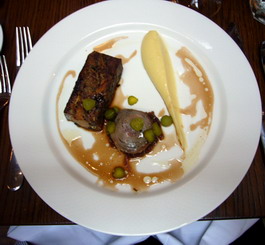 My second course, Braised pig head, potato puree, caramelized onions, was even better than I remembered it from Arbutus. The rectangle of meat, topped with jellied essence of stock and cartilage, was richly concentrated; its soft texture, totally lacking in stringiness, showed that the cooking had been slow and gentle. There was a complexity of flavors to match any mouthful of long-matured wine—if food and drink were priced strictly by quality rather than rarity and snob appeal, this would be worth as much as a glass of Chateau Petrus.

The potato puree was in the Robuchon class, and the caramelized onion had been slow-cooked to total softness. A couple of years ago, judging for the Great Taste Awards, I encountered a gold-medal-winning onion marmalade not nearly so good; if Anthony were to bottle this, he should walk away with every prize going. It was elegantly capped with a paper-thin slice from a whole onion, cooked into total submission. 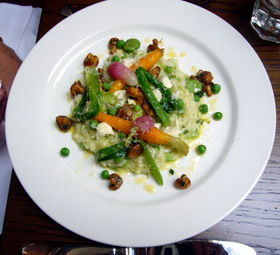 Meanwhile Mary’s Young summer vegetable risotto with fresh goat’s cheese had arrived. The rice was done to perfection and deliciously cheesy and the vegetables, like those in her soup, had been cooked to that ephemeral point of total tenderness just before they lose their texture. It takes a chef who really cares about vegetables to take this kind of trouble. There are good reasons why they don’t figure so prominently in most gourmet restaurant menus: unlike meats, green vegetables—the healthiest kind—don’t sit around happily refrigerated for a few days, get cooked or partially cooked in advance, or even (God help us!) get moved in and out of the freezer. And once they’re done, they must get promptly to the table. That’s why Mary and I are so fond of Mon Vieil Ami in Paris, where they are taken so seriously that, in the description of each dish, they appear before the meat. 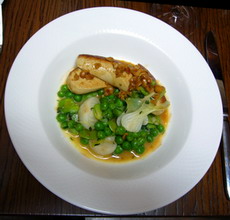 And finally, my last starter, the intriguing Wild rabbit and foie gras boudin blanc, broad beans, peas and summer savoury. The sausage was of an extraordinary delicacy. Like the pianissimo music of Morton Feldman, it required a scaling down of the senses. If I were to order this succession of dishes again, I would reverse the sausage and the pig’s head; fortunately there was a sufficient gap between the two courses. Nothing more to say about the vegetables that came with this course except that they tasted of themselves, which is the highest praise I know of. 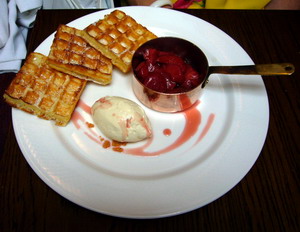 We had told ouselves that we’d skip dessert, but a plate of Fresh vanilla waffles, crushed warm strawberries, Chantilly cream arrived at a nearby table and good intentions flew out the window. The waffles were extraordinarily light; they reminded me of a sour cream waffle recipe from The Joy of Cooking which I used to serve up from time to time for Sunday breakfast, back in the good old days before my belt started mysteriously shrinking. 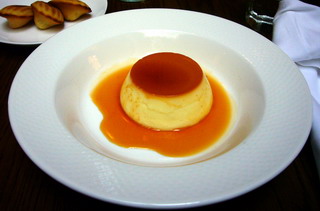 I couldn’t let Mary eat dessert alone, so I ordered the Crème caramel, warm orange flower madelaines. One reviewer had dismissed it as “eggy”, another said that it was the best he had ever had; I was inclined to agree with the latter. The madelaines, unlike the last I had eaten in a restaurant, were cooked to perfection, still warm and moist but totally undoughy in the middle. Marcel Proust, eat your heart out.

It’s probably furthest from their minds, but in opening such a restaurant in such a location, Anthony Demetre and Will Smith have made, as it were, a political statement. Foodwise, this is a neighborhood dominated by the pretentious and the populist—the former for the bosses, the latter for the workers. But the Wild Honey menu features neither grilled lobster nor tuna sandwiches. It's a restaurant where a CEO and a secretary might din 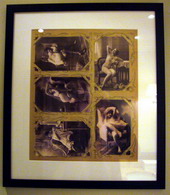 Finally, I suspect that Anthony and Will have a sense of humor. The menu invites you to start your meal with a Wild Honey Cocktail. If at the end you go to relieve yourself, you will find a framed display of Victorian Wild Honeys posing provocatively on the walls. Mary tells me

that the Ladies is similarly decorated. Perhaps they were left behind from racier days, when the members of the gentlemen’s club were no gentlemen.