L'Os à Moëlle is now owned by an Alsatian chef/owner. Same name, same phone number. We booked at the Cave for lunch last Sunday and got a very unpleasant syrprise. "German" food (by our standards), somewhat different formula for the menus and very expensive for what was offered. Didn't appear the restaurant [across the astreet] was ready to open but it is under the new owner (Schmidt).

The Cave across the street from L'Os à Moëlle is one of Jeffrey Steingarten's favorite Paris bistros, and no wonder. It's the closest you may get to being entertained by a grandmère without having to listen to her idées fixes. The food is simple, delicious, competantly prepared and of unlimited quantity. In summer there are tables in front on the sidewalk; inside are racks containing a hundred-odd varieties of mostly French wines, modestly priced, and a small bar where you may order them by the glass or the bottle. 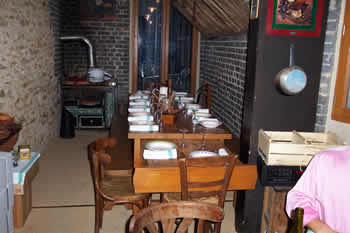 In the long vault behind are three large communal tables, two of them round, a third long and rectangular. In this relatively small space somewhere between twenty-five and thirty diners can be accommodated.

The evening I ate there - early as usual - I shared a round table with only two other diners, a girl and her cousin. Conscious of the cave's social conventions, she apologized that her cousin didn't speak English and asked my permission to continue her conversation with him in French. How extraordinarily considerate! I explained that I was happy to devote myself to eating and taking notes.

The table was so full of goodies that some of the dishes had to be stacked. There were two excellent terrines, made on the premises; good bread of the pain levain variety; a big bowl of aïoli, as strong and generous as at l'Ecurie; a bowl of cornichons (gherkins); and a big bowl of excellent black olives. On the kitchen range at the end of the room there was a tureen of rich cream of celery soup; shortly thereafter it was joined by the main course, a platter of crispy-skinned roast chicken on a bed of spinach and chopped kidneys, well imbued with the juices of the chicken, with roasted sliced potato.

For those who could manage a cheese course there were light fresh cheeses, including goat. And finally, covering a sizeable shelf, were the deserts: a big bowl of île flottante with great mounds of soft meringue; creamy rice pudding; gently poached dried fruits; pears lightly stewed with sticks of cinnamon; stewed figs; crème caramel; tarte tatin; and prunes cooked with lemon wedges. Coffee was included with the meal; it came in an old granite pot whose lid fell off when I poured it into the little glass that was brought to drink it from.

All this for 130ff. [In 2009 it's 20€, still an increasingly popular bargain.] The wines in the racks were so reasonable that I decided to really put the sommalier to the test and try the cheapest red they had, a vin de pays d'Orange at a ridiculous 35ff. It proved to be pleasantly drinkable - as good as many a bottle I've drunk at three to four times the price. What a bargain this place is, for both food and wine! Even though this was a midweek night, the second sitting at nine-thirty was sold out. Next time I'm in Paris I may eat a lot of lunches there.

A week later I was back with Mary, Hugh and Meg, this time at L'Os à Moëlle, the parent restaurant across the street. Knowing the possibilities, I aimed to arrive early and start with a glass of wine in the Cave which we could take with us after we'd looked around. It being opening time, we practically had the place to ourselves - it felt like our private club. 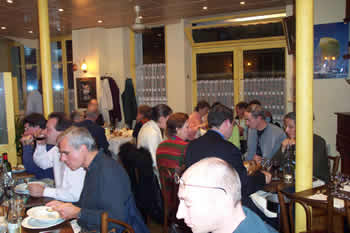 In summer the restaurant's corner location must make for an open sunny atmosphere; in winter the pale yellow walls predominate.The room is simple, with bare tables and bentwood chairs; it was not until we began to examine the blackboard menu that we realized we were in a culinary cornucopia. Between the various dishes, et was a more frequent conjunction than ou—at the price of an ordinary meal, this was a veritable menu gastronomique of no less than six separate courses. It's worth listing them in detail: 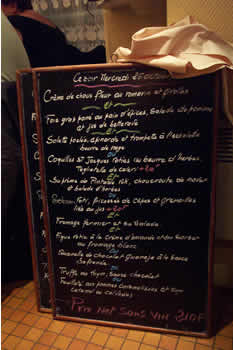 My personal choices included the scallops, the partridge and the figs. I promised myself that I would make notes of anything which failed to work properly, but in the event there was nothing to write - we could simply enjoy the food and each other's company. The ambitious descriptions on the blackboard had been fulfilled. It's perhaps the most sophisticated meal I've had in Paris the past few months, with the notable exception of L'Astrance, at double the price.