2007 Last year a thread on eGullet reported an unfortunate dining experience equivalent to an endlessly repeated farewell recital, but this year a repeat visitor from Denmark tells me at length and in detail what I splended meal she and her husband have just had, measuring up to the standards set for them half a dozen years ago. I would like to think that Chez Gramond continues to be living history.

Thirty years ago I reverently photographed the "cottage" at 27 rue de Fleurus to which Gertrude Stein and her brother Leo had moved in 1910, seven years after Gertrude had come to Paris for a sojourn which would last the rest of her life, almost half a century. (It was easy to gain access to the courtyard in those more open days; the huge gates were not shut during daylight hours.)

I didn't know it at the time, but the compact two-story house was already occupied by Jean-Claude and Jeannine Gramond, who in 1967 had taken over a modest bistro 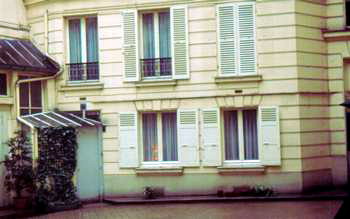 up the street at number 5, close to the western entrance of the Luxembourg Gardens. (Patricia Wells confusingly conflates the two addresses into one.) Today the Gramonds still occupy both premises. The Stein address is identifiable by a plaque on the outer wall, but nothing can be seen beyond the solid metal sheets which make the elaborate iron gates proof against visual as well as corporeal invasion. The bistro, however, has a welcoming glass conservatory projecting onto the sidewalk.

Once inside you feel as thou 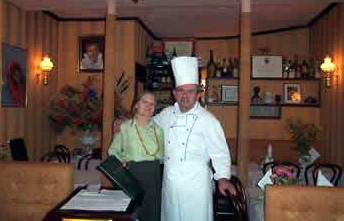 gh you had entered Dr. Who's tardis and were hurtling back half a century towards post-war Paris. The Friday evening I showed up for dinner I had the place to myself - no "modern" conversation at adjacent tables to clash with the ancient lace tablecloths, the satin-striped wallpaper and the fish tank in the front window - for company, not for cuisine. When I announced to Madame Gramond that I brought greetings from Marlena Spieler of California, she went into the kitchen and brought her husband to share the conversation.

Some time later - it didn't matter when, for I was no longer in a clock-dominated universe - I settled down to a perusal of the menu. Quite audibly from the kitchen came the sounds of an old-fashioned French radio station, something rather like the BBC's Golden Oldies Radio 2. Ancient French pop music, with informal conversation in between - were they discussing the state of Paris since the liberation?

The carte was in itself a remarkable object, for it had been reproduced at 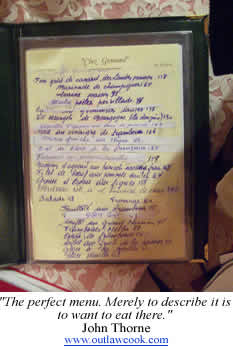 some time in the distant past on a flat-bed jelly duplicator - the sort which produced a hazy purple image that looked as though it were fading before your eyes. Is it still possible to purchase the fluid for these ancient contraptions? Perhaps not, for the menu sheets had been pasted and repasted with hand-written strips which seasonally adjusted the dishes on offer. We were back in the post-war era of acute paper shortage.

The offerings consisted entirely of classical French dishes which might have been on the carte when the Gramonds opened in 1967. No tapenade sushi here! I settled on what seemed the inevitable choices: foie gras de canard des landes maison (fresh duck liver from Gascony lightly coated with coarse salt and flash-fried in butter) and, now that we were in the game season, civet de lièvre à la Française (a rich and complicated stew of wild hare cooked in several stages with wine, bacon and vegetables and thickened at the last minute with the hare's blood). For desert I ordered in advance the souflé [sic] au Grand Marnier.

list was as historic as the rest of the establishment. There was a long list of Bordeaux and Burgundies from the proprietors Ch. Chapelle et Fils, an old firm with whom Mssr. Gramond had done business for many years. Tucked in among them was a 1974 Petrus at 8900ff. I had reached one of those rare moments when I wished I were truly rich. These were wines not intended to reach their prime for at least a generation - "time is money" was then a vulgarism. From this venerable list Madame Gramond guided me to a half-bottle of Chassagne Montrachet 1978, unusually a red rather than a white. With it came a great wide glass which would have sufficed as a baptismal font. The wine leapt out of the bottle with the freshness and agility of a long imprisoned genie. I have the bottle before me, its label reducing rapidly to powder. I take out the cork and catch a slight remaining whiff of its aristocratic liveliness.

The foie gras was like several other perfect examples I've had - a duck liver, like a steak, is hard to spoil if the raw ingredient is of the highest quality and you don't overcook it. 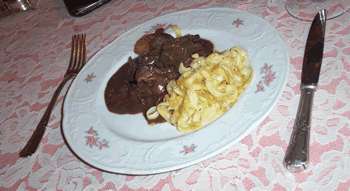 But the civet de lièvre was a revelation.I had eaten a similar recipe two nights before at Le Petit Marguery, a grand institution with an army of chefs. It was truly excellent; but this version, prepared by a single unassisted chef in a tiny kitchen, made bells ring and whistles blow. Towards the end of the evening another solitary diner arrived for a late meal and I was so well lubricated as to tell him that the hare was magnifique. He thanked me with evident sincerity on his way out.

I was still ensconced, working my way slowly through a soufflé so light that it threatened to lead me a merry chase around the dining room. (Earlier I had heard the ominous sound of an electric whisk, but the finished product showed no ill effects.) Meanwhile the music from the kitchen had changed to the love duet from Tristan und Isolde. I was well and truly infatuated.

Mssr. Gramond came out of the kitchen for a last goodbye. He told me proudly that he was a royalist. A royalist, in France, in 2001? It was no more incongruous than the ambience and the cuisine he was so staunchly defending. This is not a cheap establishment - my bill came to 767ff, about half of which was the memorable half-bottle. In Paris today, who is willing to pay that kind of money to eat in an ancient bistro which appears in none of the fashionable guides? François Mitterand and the various bishops, professors and academicians who used to lunch here are long departed. So what keeps it going? Perhaps a handful of devotees who are determined to preserve this precious remnant of a disappearing tradition.