Squaring up for a Meal 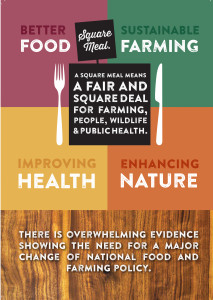 ity, London) brought together a panel of six directors of well-established food- and environment-related NGOs moderated by Tim Lang, the University's distinguished professor of food policy. Their collective report, the product of a year-long consultation, together with the evening’s discussion which followed from it, presented a cogent summary of the biological and ecological threats to human and animal survival. These included climate change, obesity and its mirror image starvation, unsustainable agriculture, and the decimation of wildlife. We were told how amicably the committee had agreed on the points to be made and what strong grounds there were for optimism. We were then told that this was just a beginning and were encouraged to make our contributions to the continuing discussion.

But “debate” had proved to be a misnomer. Near the end of the discussion, a Times journalist asked wryly, “Was there anything the panel disagreed about?” In another sense of the word, the debate itself had proved to be comfortably square. What had not been explored was the fact that these threats to our survival are not mere collateral damage, to be corrected by negotiation and education, but are an integral and essential part of the profit structure of global capitalism.

There is a lot of money to be made, not only by rushing us toward Armageddon, but also by the ineffective but expensive efforts to ameliorate it. Alas, there are no vested interests dedicated to preventing our demise. There’s no short-term profit in that, only our collective survival, which doesn’t appear in this year’s ledger.

The corporate actions and policies that are destroying life on our planet will not be relinquished voluntarily; legislation together with effective enforcement are required, and on a global scale. During the evening’s discussion there were moments of anguish at how European governments, including our own, had listened to our panellists’ expert advice and then caved in to industry; but the implications of this accelerating sell-out were not followed through.

The legislative committees in which our laws are drawn up always include the token well-publicized appearance of a few expert campaigners and then end in private collaboration with the very corporations that are causing the damage which the laws are supposed to correct. Thus, in their final form, these laws are phrased so as to sound reassuring, but they include clauses designed to make them ambiguous and impossible to enforce. Meanwhile, before they go into effect, the corporate lawyers who had effectively dictated them will already have worked out how to make them as useless as a locked gate in the middle of an open field.

But how could it be otherwise? Can we expect legislators to come up with laws that are strongly against the interests of those who have been instrumental in putting them into office and keeping them there? If we really want to save ourselves and the planet, we must do more than buy organic, recycle, not get fat, and teach our children to grow vegetables. These actions are, in the succinct words of the theologians, necessary but not sufficient for our salvation. What is required is, in some meaningful sense of the word, a total revolution. This evening’s discussion should have been an occasion for collective anger. What we got instead was charter membership in a mutual admiration society, followed by lots of wine and a tasty square meal.

On 21 January 2015, Tim Lang chaired another presentation at City 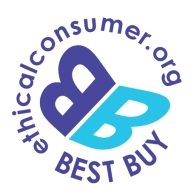 University, this time on Consumer Campaigning in the 21st Century. The speaker was Rob Harrison, one of three founder directors of the Ethical Consumer Research Association in 1987. In his historical summary, he cited a succession of successful campaigns, beginning with the Anti-Apartheid Boycott in the 1960s and concluding with Fair Trade and the prospect that more and more foods in the future might not only be fair traded but even produced within a not-for-profit economic framework.

But two accellerating crises threaten to make such campaigning ultimately ineffectual, however well organized. First, trickle-down economics has resulted in a flooding upward of poverty on such a scale that, even in the more prosperous countries, ethical consumption is rapidly becoming an elitist luxury. If you are poor, you're looking only at the price tag. With a hungry family waiting at home, who is going to check the Ethical Consumer website to see which food producers rate the highest in their detailed evaluations?

Even in comparatively prosperous Britain, the major supermarkets, which boast deceptively of their rotating bargains, are rapidly losing trade to the German chains Aldi and Lidl, whose prices are an order of minitude lower than their British competitors. As for the PIGS (Portugal, Ireland, Greece, Spain—the European countries in serious economic trouble), food poverty is rampant and increasingly desperate. If it exists, one of the smallest organizations in the world must be Ελληνική Ένωση καταναλωτών ηθικές (The Greek Association of Ethical Consumers.)

In countries all over the world, at successive levels of government, laws have been forced through which allow corporations to sue their critics for defamation; the documentary Food Inc. brought this vividly to our attention.  But now global legislation is being prepared which will be even more powerful and destructive of consumer health and welfare. Both the Atlantic and Pacific Trade Agreements, drawn up behind closed doors, call for the establishment of secret courts that would give new rights to corporations to challenge environmental and other public interest policies in un-transparent trade tribunals, and the exclusion of such key environmental agreements as those addressing climate change and mercury pollution. This would make ecological and consumer campaigning at the national level an empty ritual.

Global legislation to protect consumers and the environment is essential but, even if it is eventually accomplished, it will take years. Meanwhile, with many multinational corporations larger than most developing countries, national legislation to protect consumers must not be subject to global negation by secret courts that are conceived and administered by the very corporations which have made such laws essential. In 1993, Tim Lang and Colin Hines wrote The New Protectionism: Protecting the Future Against Free Trade. It's well past time for a new edition.