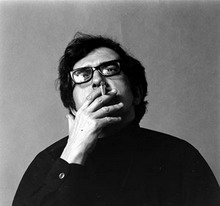 After a performance of Luciano Berio's Sinfonia, conducted by the composer, a small company of the surviving performers were nursing their drinks and their wounds. "Berio is his own worst enemy," someone said. "Not while I'm alive!" came the rejoinder. There was general merriment and a slow return to equilibrium.

The work of certain artists is so commanding that, no matter how fascinating their personality, one might well prefer their art to their company. Max Beerbohm tells of meeting Henry James on the street and refusing an invitation to tea because he had just acquired James' latest novel and couldn't wait to read it. With others, the preference results not so much from the power of the art as the character of the creator. There is a growing company of musicians who claim that the lowest point in their careers was a rehearsal in which Berio, following his usual practice, had singled them out to be an object of elaborate scorn; each in turn had been the chosen victim. One fine English composer was, as a young percussionist, thus subjected to public humiliation; another was so methodically brow-beaten because of the way he held his double bass that he seriously considered giving up any kind of career in classical music. As for myself, I am on record as having declared that I love his music so much that nothing would give me greater pleasure than mixing a complete series of his electroacoustic masterpieces—so long as it was a posthumous memorial.

Women are no safer than men. A gentle, diminutive harpsichordist with the Leningrad Philharmonic was addressed by an Italian epithet so vile that if the translator had not tactfully omitted it there could have been an international incident. My evidence is not anecdotal; I was mixing the rehearsal and a gasping multilingual companion explained to me what had just occurred.

Singers, a favorite target, are regularly reduced to tears. The distinguished American conductor David Robertson endeared himself to a vocal ensemble by defending them collectively against a particularly vicious onslaught. In the course of several agonizing days a singer had been taken violently ill and could not come to a rehearsal. "I cannot hear the second alto," Berio shouted. There was a short pause. "She is in her hotel room," the conductor called over his shoulder without missing a beat. "Throwing up."

Those who supply Berio's sacrificial lambs nevertheless feel honored to work with such an undeniably great composer, whose works can also be a steady source of income. But occasionally a conscientious fixer is swept away by the noble urge to protect his charges from ritual slaughter and a new source of fresh meat must be found. There is a legend that P.T. Barnum's circus featured a friendship between a lion and a goat. "How do they get on?" someone asked him. "Just fine," replied Barnum. "Of course once in a while we have to replace the goat."

Nemesis, according to the ancient Greeks, will eventually catch up with one who persistently violates the canons of decent behavior. In the case of Berio I was there and now don the cloak of the messenger who enters in the second act with the fearful news.

A performance of Sinfonia, the maestro conducting, was arranged for the Huddersfield Contemporary Music Festival. The Town Hall, the only performance space which could accommodate both the performers and the expected audience, was too small for the vast orchestra. I was not mixing the sound, having been summarily consigned to oblivion by the composer some years before, but my successor Hugh Macdonald was a good friend and I was happy to supply the equipment and help him set it up. Looking at the undersized, steeply raked performance space, I was happy not to be in charge.

We spent the brief time we had been allowed before the rehearsal installing and checking out the system as best we could. The singers, in accordance with the score, were to be in a semicircle around the podium. Loudspeakers were placed on either side of the narrow stage, with another pair on the upper level at each end of the horseshoe-shaped balcony for those without a sightline to the stage. It would have to do.

But when the performers arrived it was obvious that there wasn't room. Where could the singers go? In desperation they were moved to the topmost level at the furthest edge of the terraced stage around the organ console. The upper-level loudspeakers were moved in closer to them and the ground-level speakers left in place to bring the sound to the greater mass of the audience as though the singers were still in their proper location.

"What are these speakers doing down here?" screamed the maestro. "The sound must come only from where the singers are, up at the top. Turn them off!" My friend and I looked at each other, shrugged, and obeyed orders. The rehearsal took place, the balance was acceptable, and we emptied our hemlock back into the bottle.

The audience that evening was gratifyingly large. They soaked up a lot of the amplification, but, from where we were at the back of the ground floor, the sound was well balanced and the voices were better defined than they had been in the empty hall.

But at the end of the first movement the maestro laid down his baton and turned to face the mixer. "I cannot hear the voices," he called plaintively. Immediately there were shouts from the audience of "Neither can we" or " We can hear them," depending on where they were sitting.

The maestro, by dogmatically silencing the lower pair of speakers, had severed his lifeline. In rehearsal the empty reverberant space had reflected the sound of the distant upper speakers back to him, but with the audience in their seats, the sound went high over his head and disappeared. The singers, for all he could tell, were miming.

Everyone, trained or untrained, is of course an expert on the subject of amplification, and so a disorderly public debate began in which each member of the audience had a different diagnosis and a different solution. They might be arguing yet if Terry Edwards, a choral director and long-time associate of Berio, had not risen and announced, in a basso profundo which silenced all dissent, that from where he was sitting near the mixer the amplification of the first movement had been as fine as any he had ever heard and that the conductor must have faith in his musicians.

And so the concert was allowed to continue. But the incident so upset the maestro that he lost his way in the second movement and the performance fell apart. The BBC, who were recording it for subsequent broadcast, tore their hair in impotent frustration as thousands of pounds gurgled inexorably down the drain.

The performance, of course, could not be broadcast. But within the BBC there must exist a choice collector's item, circulating stealthily from hand to hand. I hope there is a swelling company of musicians who have chuckled gleefully at the rare spectacle of justice being done on earth.

Hugh has objected that this vignette is much too polite. Nevertheless he has asked for it on disk so that he can produce a decorative print-out to frame and hang on his study wall. [And I was informed, two years later, that a copy of this vignette was posted for six months on the Huddersfield Music Department bulletin board.]

A post script: As is well known, in 1958 John Cage appeared on the Italian TV quiz show "Lascia o Raddoppia" as a mushroom expert and, in the course of five appearances, was the ultimate winner of $6000.  Behind the scenes, as told by Luciano Berio at an Electric Phoenix rehearsal in my London studio a dozen or so years ago, there was an interesting sub-plot:  As the end of the series approached, several of Cage's friends, including Berio and a staff member at RAI (Italian radio/TV), decided that, because he needed the money, Cage must be made to win. And so, just before the final broadcast, the RAI man gained access to the office of the program's producer, found the mushroom questions in his desk, copied them, and gave them to Cage. Luciano did not state whether Cage already knew the answers.  The rest, as they say, is history. Those who are convinced that Cage was incorruptable may prefer to believe that Berio was a liar.