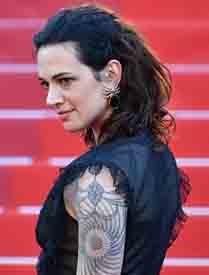 Asia Argento, a #MeToo Leader, Made a Deal With Her Own Accuser

The Italian actress and director Asia Argento was among the first women in the movie business to publicly accuse the producer Harvey Weinstein of sexual assault. She became a leading figure in the #MeToo movement. Her boyfriend, the culinary television star Anthony Bourdain, eagerly joined the fight.

But in the months that followed her revelations about Mr. Weinstein last October, Ms. Argento quietly arranged to pay $380,000 to her own accuser: Jimmy Bennett, a young actor and rock musician who said she had sexually assaulted him in a California hotel room years earlier, when he was only two months past his 17th birthday. She was 37. The age of consent in California is 18.

When the victims become the victors, they behave like . . . well, like homo sapiens. The oppressed, indignantly proclaiming their inherent virtue, prove to have been guilty of hubris.

Men, because of their superior strength, have historically been in charge and therefor able to carry out their wildest fantasies, both for good and much more often, alas, for evil. But put the "weaker sex" in power and you get a Thatcher, an Evita or a Catherine the Great.

Who were the archetypal racial victims of the 20th century who in the 21st were to become its most conspicuous pseudo-democratic oppressors? No prizes.

And what happens when the Liberals take political power from the Conservatives? In Britain we got New Labour, with its enthusiastic participation in the Iraq War; in America Bill Clinton set about destroying America's fragmentary welfare state and reversing FDR's Glass–Steagall Act, which for three decades had made banking a reassuringly boring occupation. This ultimately led to the credit crunch and the subsequent politically motivated austerity, which is carried on relentlessly all over the Western world, making the banks ever more powerful and fatally threatening. And when Obama made Bill's wife Secretary of State we got the sadistic slaughter of Colonel Gadaffi, with Hillary laughing fit to kill.

It's time to launch the #AllToo movement, which will acknowledge that whoever shares the power ends up sharing the blame. Our slogan will be Power Corrupts, our guiding text Bertrand Russell's Nobel Prize Acceptance Speech: What desires are politically important? Onward and Upward! But I won't be surprised if #AllToo is stillborn.