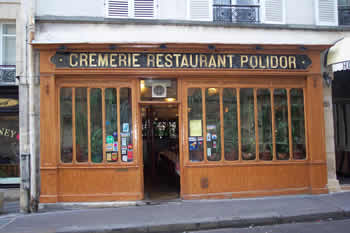 -endowed". It is an appropriate name for an open-hearted, open-handed bistro whose history spans more than a century and a half. Cutting no corners on time or ingredients, it still serves up traditional fare at prices so reasonable that it appears in the Time Out Paris Dining Guide, not under Bistros but under Budget. If they thought like modern restaurateurs, they would lower their standards and double their charges, confident that they would increase their custom.

Still identified on its façade as the CREMERIE RESTAURANT POLIDOR, it began by serving butter, eggs and cheese to women. As the years went by it was discovered by succeeding generations of artists and writers, always on the lookout for good cheap food and a welcoming host. Verlaine, Joyce, Hemmingway and Valéry occupied its tables and in the late 40s the inheritors of Alfred Jarry's College of Pataphysics held their "scientific dinners" there. (If they were anything like the banquets in his play, Ubu Roi, it must have taken a long time to clean up afterwards.) 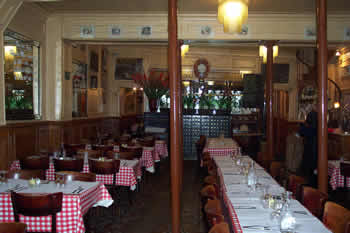 , go on a hot summer day and arrive at opening time (noon). This will get you seats at the near end of the long central table, just inside the open door. Frank, Barbara and I were so fortunate as to discover this by accident, which gave us the opportunity for a long, leisurely, coughless luncheon.

A very satisfying thick slice of solid foie gras was followed by a braised stew whose manner of construction leapt out of the pot - slow-braised guinea fowl with lardons of well-cured bacon, cabbage, carrot, onion, garlic and mushrooms, whose-red-wine-based sauce had reduced to a dense black essence, but without any of the added thickening agents that American restaurants are so fond of. A couple of days later, in the Woodrow Wilson market ("The world must be made safe for gastronomy!") I would buy a formidable hunk of similarly venerable bacon to reproduce the recipe at home.

Finally, a generous pot of the richest chocolate mousse imaginable. I had to stake out a claim to my fair share.

A return visit the following day yielded a dozen snails in garlic butter, (ample, juicy specimens, not the usual hard little pellets) and exemplary confit of duck with gratinéed potatoes, brown and crisp on top and squishy underneath. Frank and Barbara were both delighted with their courses, which I did not make note of, being unwilling to put down my knife and fork.

Why is this preeminent exemplar of artistic and gastronomic history denied a mention in most of the guides? Not a word in Gault-Millau or Michelin of course, though the latter gives three crossed forks/spoons to the 18th century literary café Le Procope, now swallowed up by the Flo Group and regurgitated as a trappe de touriste.

That evening I went alone to Le Bistrot des Vignes, a very different sort of establishment. After a hot sweaty walk uphill from the metro, the cool breath of air conditioning was like a soft ocean breeze. A pair of willowy waitresses greeted me and escorted me to my table, lissome as sea nymphs. The soft lapping of New Age music lulled me into semi-somnolence. (It proved to be a CD compilation called Dreams.) I might have been on Circe's island, about to be transformed into the piéce de rèsistance for the next unwary visitors. (1) 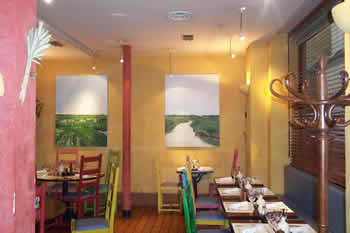 The décor was restful and unobtrusive - brown tiled floor, buff tiled walls, wooden-topped tables and wooden chairs in soft variegated colors. After the unrelieved heat it was a welcome sanctuary, whose refreshing effect was accentuated by a dish of hot crisp radishes.

The first and last courses sent me to my diary, making notes for future recapitulation. To begin, poivre rouge grillé a la fleur de thym, et fillets de sardines marinés aux épices. The cold pepper strips were thoroughly cooked and peeled, the raw sardines a tasty echo of sushi. They alternated on the plate, arranged like the spokes of a wheel and drizzled with a strong vinaigrette. A few wild salad leaves nestled at the center.

Dessert was similarly simple and eminently repeatable, poêlon de fromage blanc aux fruits rouges et au miel d'acacia. Just a pot of fresh cheese with a layer of very ripe strawberries and raspberries and a drizzle of honey. In summer I could eat it every day.

The main course showed a single symptom of corruption. There was nothing wrong with the poulet fermier grillé au romarin, grosses frites au couteau à la fleur de sel. But this exemplary chicken and chips was served with a dark thickened gravy whose source had nothing to do with the cooking of the bird. It was the sort of flavorless goo you'd expect to encounter in Howard Johnson's, or in the pages of a flour-mad American cookbook.

Who are the anticipated clientele in this relatively new bistro? It already rates a critics'-choice red star in the Time Out Guide. Chef and staff speak fluent English, the beautiful waitresses waft by every few minutes asking if everything is all right - and l'addition arrived with "Have a nice evening!" handwritten on its blank folded side.

It would be easy to dismiss all this as a blatant attempt to woo American diners. But the menu is in French only - no English translation. Judging by what I overheard, the other diners were mostly French. I suspect that what all this reveals is a growing clientele of young internationalized denizens of the increasingly chic 16th arrondisement, to whom such touches are simply a normal part of everyday life. For them, an old-fashioned bistro serving escargots and coq au vin would be an anachronism.

I pondered all this as I walked back to the Passy metro station. Rounding a corn 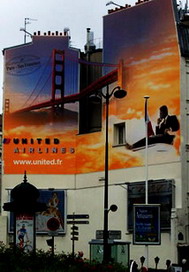 er onto a street of shops, I was confronted with the windowless end of a traditional Mansard-roofed apartment building, which had been colorfully decorated with an enormous United Airlines mural featuring the Golden Gate Bridge. The text was, of course, in French. Just like the menu.

NOTE: The second day we went to Polidor for lunch I thought the bill was rather large but, in a warmly alcoholic haze, didn't bother to check it. Only later did I discover that we had been charged for four set luncheons at 145ff, rather than three. When Frank and Barbara returned for a third visit they checked the bill and found that they were again overcharged, this time by 30ff, which was promptly deducted when they pointed it out. So eat at Polidor by all means - but take your calculator.

(1) After writing this a couple of weeks later, I learned that a firm which caters private parties for the Royal Opera House is called - Circe. One of their French waiters told me. He was serving luscious big hunks of red meat lightly cooked on skewers. Makes you wonder.