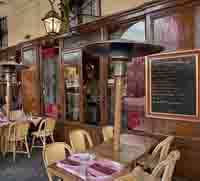 I’ve suggested that we meet for lunch at the Brasserie Ma Bourgogne, a sidewalk restaurant/cafeat the northwest corner which is much frequented, but not commandeered, by tourists. It has remained unchanged during the decade or more that I’ve been going there (and the last ten years have seen the destruction of many a culinary shrine!). Perhaps the best indication that they have not sold out to the tourist trade is the fact that they still resolutely refuse to accept credit cards.

Ma Bourgogne was already an institution half a century ago when Georges Simenon identified it as a favorite haunt of Inspector Maigret, who embodied the author’s love of classic bourgeois cuisine. This was so heart-felt, and so detailed, that Robert Coutine could recreate the recipes in a splendid little volume with Simenon’s imprimatur. You’ll still find this sort of fare at Ma Bourgogne: simple old-fashioned dishes that elsewhere have become clichéd and, in the process, cheapened and corrupted.

Today is so witheringly hot that I opt for a cold lunch: gazpacho followed by steak tartare and finishing with cantal cheese. How boring this could be! And yet the cold soup is dense, rich and spicy, with identifiable fragments of ripe tomato, pepper and cucumber. The robust steak tartare has the deep red color and the melt-in-the-mouth texture of expensive lean meat, not the tough fatty scrag ends that are so often ground through the mill in tourist traps. And finally, the cantal: rich and crumbly like Mrs. Montgomery’s farmhouse cheddar, with a thick moldy crust, just as Quentin Crew describes it in Foods from France--a million miles from the factory-made blocks of rubber that now pass for cantal in the supermarkets. I comment to the waiter on its quality and he affirms that it still comes to them straight from the mountains of the Auvergne (perhaps from the high pastures of Jules Porte himself).