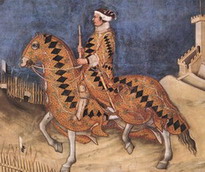 Siena on a shoestring

A show at the National Gallery sends us on a

Simone Martini's evocative mural of Guidorriccio da Fagliano was done in a hurry and on the cheap—the entire painting of the commander and his horse appears to have been completed in a single day. Could Mary and I not absorb something of the character of his amazing city in three?

O Fortuna: Blown by the winds to Siena Sometimes an exhibition of art from a particular time and place reaches out, grabs you by the scruff of the neck and hauls you away to its city of origin.

Slow and Steady A top listing in the Slow Food guide brought us to Hosteria il Carrocchio our first night.

High Gothic Splendor Siena’s Duomo is a magnificent example of what can result from the chaotic concatenation of uncontrolled forces and events.

P-town déjà vu In Siena where it belongs, the Provincetown Pilgrim Monument is no longer a grandiose anachronism.

I did it my way! In a world of commercial clones, Niccolini Marcello’s Locanda Garibaldi is a place apart.

Horses for Courses In the Grotto di Santa Caterina da Bagoga, an ex-jockey has for 35 years been serving up some of the best food in Siena.

Good Government, Bad Government. . . the art’s still great! The Palazzo Pubblico is a contest among artists and architects in which everybody wins!

Siena Preserved Siena has always been a great banking center, but along with Bologna it is one of Italy’s great left-wing strongholds.