Next weekend I’m having a dozen vegetarians over for cassoulet – yes, that’s right – so yesterday I went into town to the Berwick Street market to see what they were offering in cheap pound-a-tray vegetables. The walk back to the Leicester Square tube stop by way of Old Compton Street was a stroll down Memory Lane past I Camisa (sequel to I Claudius?) and the Algerian Coffee Store, both places at which I regularly shopped in the late 60s when we lived at Marble Arch. 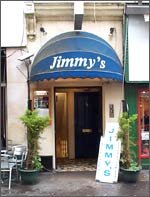 And there, off to one side on Frith Street, was Jimmy’s. The last time I was in Jimmy’s was in 1955. I was in the US Army stationed near Rushden – the end of the Birch Bus line – and my weekends were regularly spent in London, attempting to stretch my army pittance to infinity. Jimmy’s was about the cheapest place to eat (a rough equivalent to Galotte’s in Paris, so vividly recalled by Waverley Root in The Paris Edition). When I was down to my last couple of shillings I could always go there and fill up on something substantial.

Half a century ago Jimmy’s was across the street, but it’s still down an unprepossessing flight of stairs. I stopped to look at the menu. Back in those days the few Greek dishes were scattered through a list of the standard English fare demanded by labourers and cabbies, but that portion of their clientele has long departed, so Greek Cypriot now reigns supreme. Would it be edible? What the hell. Today’s Nostalgia Day – go for it!

Downstairs was a much more respectable establishment than the one I used to frequent. Not only were there white tablecloths; they were clean. But the décor must date from closer to its origins than to the present day – rough white plaster, a primitive painted mural, ancient chairs and a wall space in a corner covered with cards (already showing three years’ yellowing) to congratulate them on their fiftieth birthday.

At two-thirty in the afternoon there were fewer than a dozen people in the restaurant, most of them as superannuated as your reporter, and all of them speaking Greek. A couple of diners got up from a table and went behind the bar, where they resumed their real identities. A waiter came over with a menu. When I told him it was my first visit in almost half a century he smiled, but showed no particular surprise. Later he appeared to be telling two women behind the bar; amidst the flow of Greek I heard the words “forty-five years” and the women smiled in my direction. No big deal. I might have been the second geriatric to show up that very day.

A generous dish of black olives and little green peppers appeared. From the well-worn menu (unchanged since the 60s, said a tattered newspaper clipping on the wall) I selected a starter of little Greek Cypriot meat balls and a main course of stifado – meltingly delicious when it’s properly prepared, coarse and stringy when it’s not. The meat balls were crisp on the outside, with moist and herby interiors. The stifado, an enormous pile, I could easily have cut with a spoon – moist, springy, redolent of long marinating and slow cooking in strong red wine. It was accompanied by dark brown crisply fried potatoes, roughly cut in irregular chunks and loaded with deliciously wicked calories. There was barely room on the plate for the small green salad, undressed but with oil and vinegar separately on the table.

An attractive young woman swept through the door and across the room to an old man who’d apparently been waiting for her. “I’m so sorry I’m late,” she apologised. It was the first English I’d heard. His granddaughter, probably. This is the sort of place where, if you see a pretty girl with a man old enough to be her father – he is.

A wedge of baklava for dessert (about twice the usual size), with good crisp pastry, lots of nuts and not too much honey. Then a large cup of strong Greek coffee, minus sugar as per my request. I could see the old man with a walrus moustache behind the bar taking the pot off the fire twice, in accordance with the proper ritual.

It was a comfortable place to sit and read, the Greek music at a low level a welcome respite from the aggressive din of central London. The bill for my immoderate lunch, including a generous glass of Greek red wine, came to a moderate fifteen pounds. If this had been some village in the south of France, 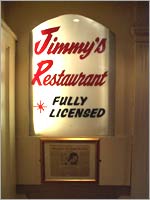 and Jimmy’s a local auberge still offering the same local specialities they had served for a couple of generations, I’d be writing a glowing encomium to French culinary integrity. But an ordinary Greek Cypriot taverna in the middle of Soho, which will only serve a mixed meze to a party of four or more? Where’s the story in that? Forget it – it’s not even listed in Time Out any more. Now, about that Thai- Indonesian- Chinese wine bar/disco that’s just opened in West Chelsea . . .